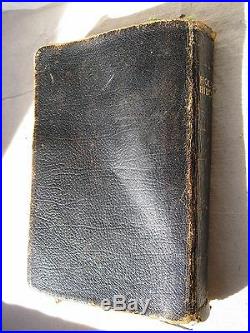 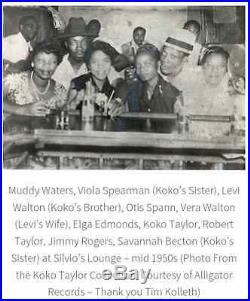 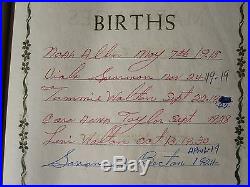 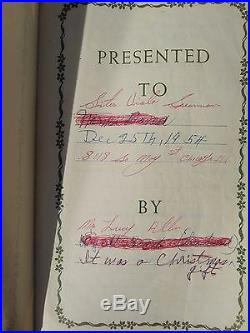 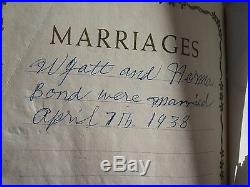 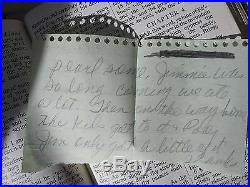 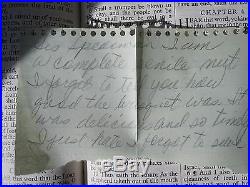 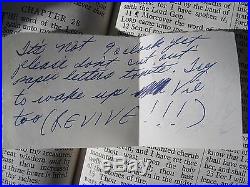 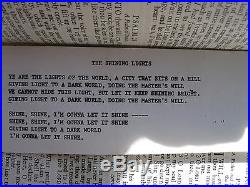 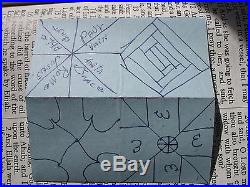 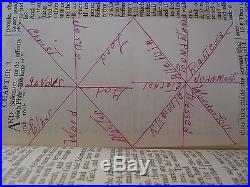 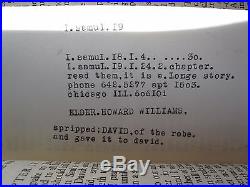 A bible belong to Koko Taylor's sister Viola Spearman listing all 5 siblings including Cora Walton (Koko Taylor) and Noah Allen, possibly a first child who died young. This great migration artifact includes approximately eight notes in either ink or typed and four other ephemeral items used as bookmarks for special places. Last origin was Chicagoland and attributed by prior owner as being from the estate of Koko Taylor. It measures just under 9 inches. Quite a jewel with some original artwork and possibly original poems.

Picture 2 for reference only. Koko Taylor, Queen of Chicago Blues, Is Dead at 80. Koko Taylor, one of the few female singers to achieve success in the competitive world of Chicago blues, died on Wednesday in Chicago. She died of complications following surgery for gastrointestinal bleeding, said Marc Lipkin, director of publicity for Alligator Records, her label since 1975.

Taylor had undergone a similar operation in late 2003 but recovered fully and was performing again by the following spring. She maintained a schedule of close to 50 concerts a year and continued performing until just days before being hospitalized in May. Her most recent album, Old School, was released in 2007. Best known for her 1965 hit single Wang Dang Doodle, which became her signature song, Ms. Taylor was one of several singers over the years to be billed as Queen of the Blues, a title first bestowed on Bessie Smith in the 1920s.

While there had been other blues queens, Ms. Taylor was the undisputed queen of the Chicago variety. It was in Chicago in the years after World War II that transplanted Southerners like Muddy Waters and Howlin Wolf added electric instruments and pounding backbeats to the raw rural blues of their youth, forging an aggressive new sound and building a thriving local scene.

That scene was dominated by male performers, but with her brash, forceful vocal style and her enthusiastic stage presence, Ms. Taylor made sure that its upper echelon had room for at least one woman. Like most of her Chicago blues contemporaries, Ms. Taylor had migrated from the South.

Born Cora Walton in Bartlett, Tenn. 28, 1928 (her nickname was said to have come from her childhood love of chocolate), she was orphaned at 11 and moved north in 1952 with the man she was soon to marry, Robert Taylor. Growing up, she and her five brothers and sisters had amused themselves by singing the blues, accompanying themselves on homemade instruments. Their father, a sharecropper, did not discourage them, although he would have rather they sang gospel music. But she said she gave little thought to pursuing a career in music until she was living in Chicago, working as a cleaning woman by day and frequenting the citys blues clubs with her husband by night.

Taylors urging, she began asking the performers to let her sit in. In 1962 Willie Dixon, an influential behind-the-scenes presence in Chicago blues, heard one of her impromptu performances and said, as she later recalled, I never heard a woman sing the blues like you sing the blues. He took her to Chess Records, where he was a talent scout and producer, and wrote a number of songs for her, most notably Wang Dang Doodle, which she recorded despite her initial trepidation about its raunchy lyrics. It made her a star. Her stardom did not reach far beyond the geographic confines of Chicago or the demographic confines of the African-American audience, however, until she appeared at the Ann Arbor Blues and Jazz Festival in 1972 and was featured on an album recorded there for Atlantic Records.

At a time when the international audience for the blues was growing, her fame soon spread around the world. Taylors first husband, Robert Taylor, died in 1989.

Her survivors include her husband, Hays Harris; her daughter, Joyce Threatt; two grandchildren; and three great-grandchildren. Taylor won a Grammy Award in 1985 and was nominated for eight others.

She also won the Blues Music Award formerly known as the W. Handy Award 29 times, more than any other performer, and a number of lifetime achievement honors, including a Pioneer Award from the Rhythm & Blues Foundation in 2003. Performing at that awards ceremony in New York, she declared, Im 74, but I feel like Im 19. A version of this article appears in print on , on page B12 of the New York edition with the headline: Koko Taylor, 80, Chicago Blues Singer. The item "VINTAGE BIBLE KOKO TAYLOR BLUES SINGER FAMILY CHICAGO GREAT MIGRATION ART POEMS" is in sale since Wednesday, May 18, 2016.