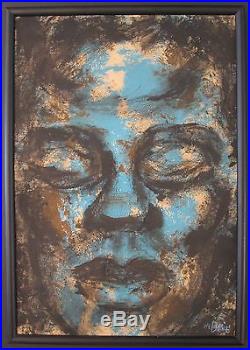 He was the second of three children of William and Mary McBride, vaudeville performers whose troupe, Billy and Mary Macks Merrymakers, included future Louis Armstrong sideman Johnny Dodds. Was around 10 years old, the McBrides joined the great migration of African Americans, and specifically of New Orleans-based African American musicians, from the South to Northern cities. Arriving in Chicagos burgeoning Bronzeville in the 1920s, the younger William McBride attended St. Elizabeth grammar school and Wendell Phillips High School. As a young man, McBride was interested in the visual arts and took classes at the School of the Art Institute of Chicago in the early 1930s.

He joined the small coterie of young black artists led by George Neal, who formed the Art Crafts Guild, a precursor to the South Side Community Art Center. But lacking institutional support during the Great Depression, the Art Crafts Guild remained a small collective. During this time, McBride worked for the New Deals Civilian Conservation Corps.

William McBride was an early participant in the effort to establish the South Side Community Art Center. Initially this movement consisted of a dialogue between younger artists such as McBride and Margaret Taylor Goss (later Margaret Burroughs) and black middle-class arts supporters such as Irene McCoy Gaines and Pauline Kigh Reid. The initial organization was brought together at the South Side Settlement House by George Thorpe, director of the Illinois Art Project, and Peter Pollack, owner of the Chicago Artists Group Gallery on Michigan Avenue, one of the few places black artists were allowed to exhibit their work.

The mission of the South Side Community Art Center, proclaimed by Margaret Taylor Goss as the defense of culture, was broad enough to incorporate the politics of respectability and the social activism of the Popular Front. One of many inner-city community art centers established by the Federal Art Project/Works Progress Administration, the center moved into an old mansion at 3831 S. Although the first exhibition was held in late 1940, the center was formally dedicated by First Lady Eleanor Roosevelt at a ceremony chaired by Alain Locke in 1941. The Federal Art Project withdrew funding in mid-1942, but the South Side Community Art Center thrived, and today remains the only surviving community art center created under the WPA. The South Side Community Art Center proved an immediate success: In its first four months it drew 7,874 attendees to classes and its first four exhibitions.

It provided a space for young artists honing their skillssuch as William McBride, Margaret Burroughs, Charles White, Eldzier Cortor and Charles Sebreeto interact with established black Chicago masters such as Archibald Motley, Jr. The center also organized art programs for Southside youth, who often only did half-day shifts at overcrowded, segregated schools. In addition, the center ran a theater troupe, the Chicago Negr0 Art Theatre, which nurtured the talents of Gwendolyn Brooks and Margaret Danner. The South Side Community Art Center was one of the most important hubs of Popular Front-era progressive black cultural politics, attracting renowned artist-activists such as Paul Robeson and Richard Wright. Perhaps McBrides most celebrated work for the center was his overseeing the designs of the souvenir books and posters for the annual Artists and Models Ball, the centers fundraising gala, which quickly became a marquee event on the Bronzeville calendar.

In the postwar and early Cold War years, William McBride was active in the buoyant dance scene of the Black Chicago Renaissance, serving as art director for the annual Sadie Bruce Dance Revue as well as the Mildred B. Haessler Ballet Groups yearly concert. Along with concert programs and pictures of the dancers, the souvenir books McBride composed contained advertisements for, representations of and endorsements from many sectors of black Chicago society. As the victories of the independence movements in Africa roused African American interest, McBride began traveling to post-colonial nations such as Ghana and Benin, attending events of the Mbari movement of Anglophone artists and writers such as Wole Soyinka in Ibadan, Nigeria, and collecting art to bring back to the United States.

Taw Ghamma remained opaque and esoteric even to McBride and Braschers circle of artist and intellectual acquaintances, but the games comedic irreverence, interest in black institution building from the bottom up and commitment to promoting the verbal and intellectual development of ghettoized children of color, won respect. In the 1980s William McBride continued to create art, write and attend cultural and political events. In the 1990s McBride was slowed by illness, and he died on August 11, 2000 at the Alden Princeton Rehabilitation Center at age 87, leaving behind one sister, Mary J.

The Flowering: African-American Artists and Friends in 1940s Chicago: A Look at the South Side Community Art Center. Illinois Art Gallery , April 7-May 28, 1993.

Popular Fronts: Chicago and African American Cultural Politics, 1935-46. Chicago: University of Illinois Press, 1999. Of special interest are manuscripts on the lives of William McBride, Jr. S vaudevillian parents, a brief composition on the lives of William McBride, Sr. And the funeral program of McBrides mother, Mary McBride. McBrides writings from the 1980s are also remarkable for their depiction of an elder African American artist-intellectual who came of age during the Popular Front mulling the state of black America in the wake of the demise of Black Power and the ascendancy of Ronald Reagan. Other documents of interest include a 1952 Cold War speech by Edith S. Sampson, the first African American delegate to the United Nations, and the National Conference of Artists 1972 Black Artist Manifesto. Much of the correspondence is from McBrides friends affiliated with the South Side Community Art Center, including Margaret Burroughs, William S.

It also includes the correspondence of Irene V. Of special interest is a letter of thanks from Mahalia Jackson to William McBrides mother, Mary McBride, for an outfit she designed for Jackson.

The series contains many official documents, writings and publicity materials depicting the centers establishment, programs and fliers for exhibitions of renowned artists such as Jacob Lawrence, Henry Ossawa Tanner and photographer Gordon Parks, as well as several of William McBrides Artists and Models Ball souvenir books. Additionally, the series includes the program from the dedication ceremony featuring Eleanor Roosevelt. Of particular interest are the Black Arts Movement-era documents of the National Conference of Artists, the McBride-designed production report books of the Federal Theater Projects Little Black Samb0, and the promotional material of the Art Crafts Guilds 1933 Artists Ball, a forerunner to the South Side Community Art Centers Artists and Models Ball.

Of special interest are programs from the Mbari movement in Ibadan, Nigeria, and several documents from the 1963 Century of Negr0 Progress fair, the last major African American exposition of its kind. Unfortunately many of the posters are unsigned, so it is often not clear which ones McBride made.

The posters capture the performances of a number of legendary black performers, such as Charlie Parker, Sammy Davis, Jr. And Association for the Advancement of Creative Musicians founding member Phil Cohran, at the height of their careers, and bring the cultural history of black Chicago to glossy, full-color life. The series includes a poster for Josephine Bakers last concert in Chicago, at the Regal Theater; it is signed by Baker.

Particularly unique is its documentation of black Chicagos vibrant mid-20th century concert dance community, including programs and souvenir books from the Sadie Bruce Dance Revue, the Mildred B. Haessler Ballet Group, the Jimmy Payne Dancers, Sammy Dyers School of the Theatre, the Joseph Holmes Dance Theatre and the Muntu Dance-Theatre. The Africa section evokes his deep interest in the continent, especially its art and politics. The education section includes materials related to McBrides teaching at the City Colleges of Chicago and to the study of black history more generally. The politics section includes documents on the Popular Front from the mid-1930s to the mid-1940s. Of particular interest is a 1939 booklet on Salaria Kee, an African American woman who served in the Abraham Lincoln Brigade during the Spanish Civil War.

The series includes many rare publications from the Black Power movement and the Black Arts movement. Noteworthy are several photographs of William McBride, photographs of early jazz musicians who migrated up from New Orleans in the years surrounding World War I, a photo portrait of Margaret Burroughs by Gordon Parks, a photograph of a young Dorothy Dandridge at an Artists and Models Ball, and extensive documentation of the funeral procession and internment of Harold Washington. Related Collections: At the Vivian G.