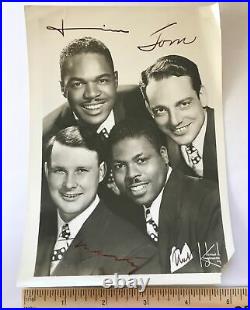 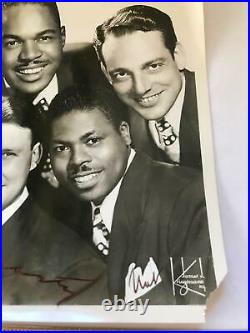 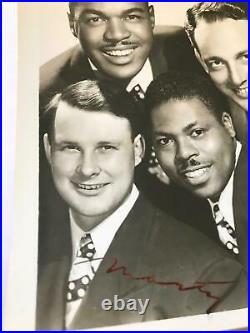 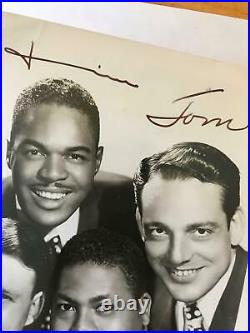 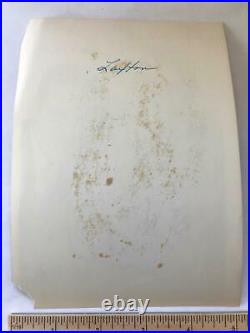 He was the in-house photographer for the Cotton Club in Harlem. Original signatures of all Four Members.

The Mariners, who consisted of Martin Karl, Jim Lewis, Tom Lockard, and Nat Dickerson. I believe this was one of the first racially mixed recording music groups to be on television. Guaranteed, vintage original, glossy photo, not a current reproduction.

This photo is not dated, but probably from the mid 1950's. The bottom right corner tip is missing. The top right corner is creased. There is glue residue on the back and a name written in ink. The Mariners regularly appeared on the TV show "Arthur Godfrey And His Friends" between 1949 and 1955.

They formed during World War II, in 1942, at Manhattan Beach, Brooklyn; the four members (Tom Lockard, Jim Lewis, Nat Dickerson and Martin Karl) were serving in the United States Coast Guard there. They toured Pacific military bases in 1945.

Arthur Godfrey hired them, and they were regulars on his radio show and later his television shows for several years. The presence of the integrated Mariners brought complaints from Southern politicians and Southern CBS affiliates, which Godfrey publicly and scathingly rebuffed. Godfrey summarily fired The Mariners in 1955. (a fairly common modus for Godfrey during these years).

The Mariners then guested on other shows such as the Ed Sullivan Show and continued to record (on the Cadence Records label founded by Godfrey's musical director Archie Bleyer) and appear on New York radio, but with diminishing popularity. As a group, The Mariners date from 1942, at Manhattan Beach, New York, where they were individually stationed with the Coast Guard. Although each of them had made many appearances as soloists, one of their officers requested them to sing as a quartet. The ensemble they formed produced such pleasing harmonies, both to audience ears and to those of the singers as well, that they decided to remain a unit.