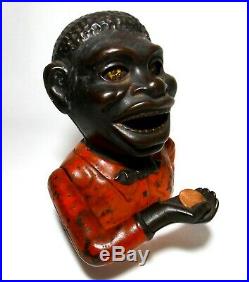 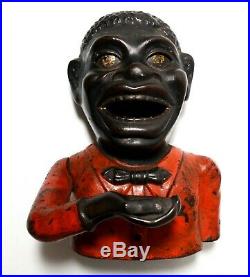 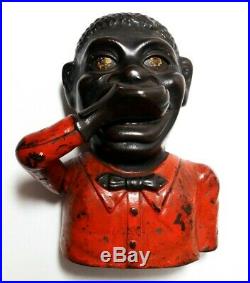 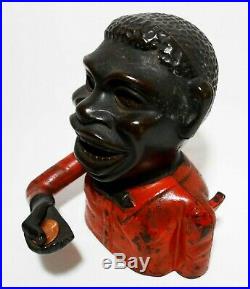 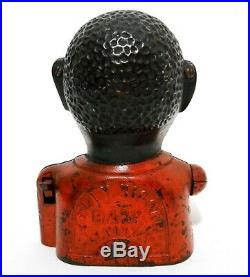 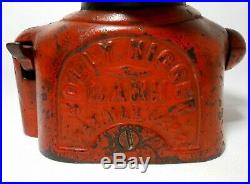 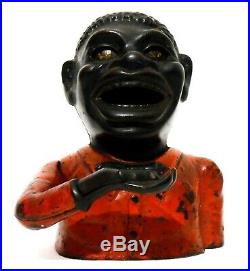 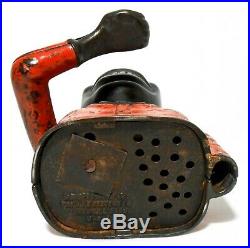 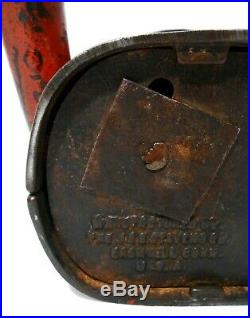 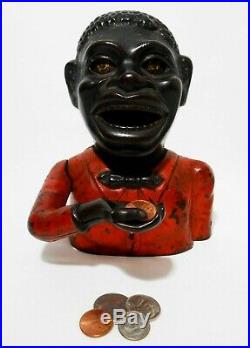 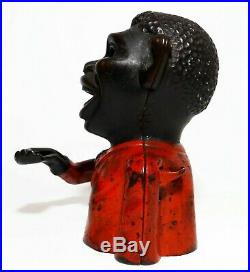 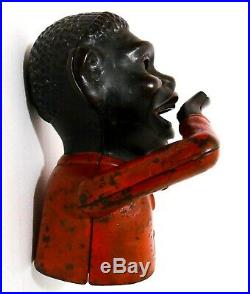 This particular late 19th century'Jolly N. Painted cast iron mechanical bank was manufactured in Cromwell, Connecticut, as indicated by the recessed tin base plate underneath the cast iron figure. There's also an embossed, stamped label and maker's mark directly on the back of the cast iron figure that reads:'Jolly N##r Bank, Pat.

There's a cast iron lever on the back of one of the arms that activated the arm and raises it, presumably holding a coin in the figure's open hand, lifting the hand cupping the coin to the figure's mouth where the coin will be deposited. The independent eyes also roll up and come back down, making this a particularly interesting and an earlier feature than similar Jolly N. Painted cast iron mechanical banks produced later. Without arguing over the social circumstances surrounding the obviously incendiary iconography and subject matter, this bank was one of the most popular mechanical banks ever produced in the United States and several variations were subsequently produced after the original was introduced.

Of course, with racial overtones notwithstanding, this piece of Black Americana is also an honest and quite telling American social and cultural artifact, that's testament to the cultural and especially the prevailing racial attitudes that existed after the culmination of the US Civil War and during Reconstruction in the United States of America. It should be noted that these cast iron mechanical banks of the Jolly N.

Were produced in Buffalo, New York and in Cromwell, Connecticut, both abolitionist, northern states with long, anti-slavery, abolitionist traditions and in which both states, New York and Connecticut, lost tens of thousands of its own young men (most of whom were white) fighting the southern Confederacy to end human bondage and 19th century slavery in the south and in the entirety of the United States. It's both academically interesting and even painful to appreciate that these banks, which were so racially loaded and explosive, were actually produced in the post-Civil War north and not in the post-Civil War south.

This painted cast iron mechanical bank of the Jolly N. Is not a later reproduction but an authentic, original late 19th century antique mechanical bank. It was and continues to be one of the most popular American mechanical banks ever made.

It was found in an early Wilton, New Hampshire estate in the home of a quite elderly woman, who suggested that the mechanical bank had been in her family for as long as she could remember and had never been out of that house for as long as she lived there and that was all of her life. She only commented that no one in her family thought the bank's subject matter was offensive or in poor taste but that she could understand how it would be considered offensive and in poor taste now.

Good to Very Good overall antique condition. Please review all the photos and if you have any additional questions or would like more detailed information surrounding the piece, please feel free to ask. The item "RARE LATE 19TH C 1882 ANTIQUE BLACK AMERICANA CAST IRON JOLLY N. MECHANICAL BANK" is in sale since Saturday, October 26, 2019. This item is in the category "Collectibles\Cultures & Ethnicities\Black Americana\Banks". The seller is "modsanctuary" and is located in Milford, New Hampshire. This item can be shipped worldwide. 11.6 oz
Home   Archives   Contact Us   Privacy Policy   Terms of Use