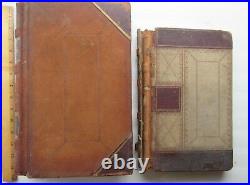 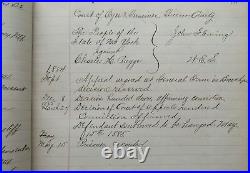 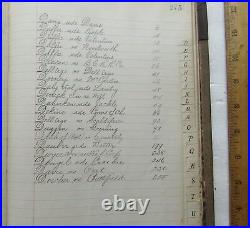 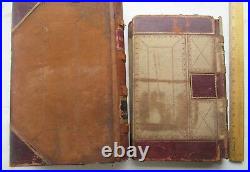 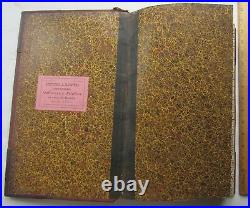 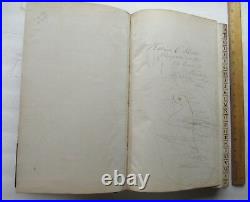 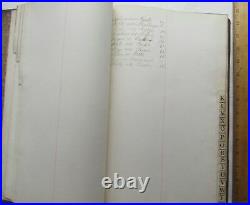 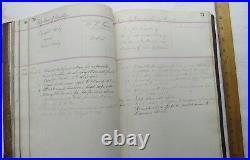 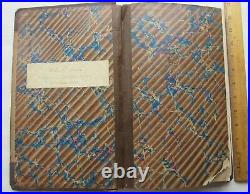 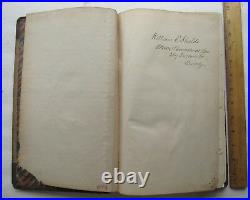 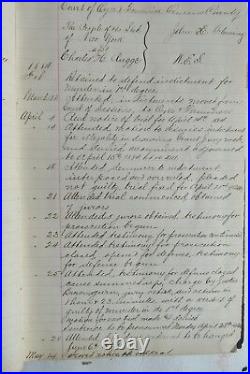 Two Rare Attorney Ledger Brooklyn Handwritten 1800s. Says on one of the pages you can view. Defendant sentenced to be hanged, May 15, 1885.

" Next line says: May 15 Prisoner Executed". The following two ledgers are included in this lot. 12 1/2 inches by approx. Label inside front cover says: William E. Shields, Attorney and Counselor-At-Law, 357 Fulton Street. On next page it says: William E. Shields, Attorney & Counsellor at Law, 357 Fulton St. There are 316 pages in the book.. And most of them were used.

On two pages (as pictured) there is the case of Charles H. More information on this case is below. Label on front inside cover says: Silas W. Marsters, Allan Stevenson, Stevenson & Marsters, engravers, Stationers and Printers, 381 Fulton St. Inside first page it says: William E.

Shields, Counsellor at Law, 26 Court St, Brooklyn. This book is not complete.. Out of 500 pages, 103 are complete. (Ledger was not completed) On top of pages it says: City Court of Brooklyn. Outside side binding of book it says: Register.

Did some research on this lawyer.. And this is what I found online.. From the New York Red Book from 1800s. Sheilds (Democrat), who represents the Sixth Kings district, was born of Irish-American parentage in Brooklyn June 6, 1861, and was educated at the Brooklyn Grammer School, No. He is a lawyer, and became widely known as counsel in the case of Rugg, the Queens county black american murderer.

He is married, living at 355 Humbooldt street, Brooklyn. He has always been a Democrat; he served with credit in the Assembly of 1890, and was re-elected in 1890 by 2,746 plurality over James Riley, Prohibitionist, and Joseph Hildebrand, Labor Prohibitionist. He served as chairman of the Committee on Codes during the last Legistature, and took a prominent part in legislative affairs.

He served as chairman of the Committee on Codes during the last Legislature, and took a prominent part in legislative affairs. He was re-elected in 1891 by 1,282 plurality over Rockwell, Republican. Shields introduced a large number of bills providing for local improvements in Brooklyn. In the line of State legislation he presented a bill prohibiting betting except on race tracks. He had a bill concerning storage warehouses and their charges, lowering those charges.

He also introduced a bill prohibiting fat rendering within three miles of Brookyn or any other city. Another of his measures provided for the disposal of unclaimed deposits in savings banks and in other banks, authorizing their transfer to the State treasury. Lastly, he had a bill to create a State board of text-book commissioners. I found another article on line from February 18, 1884 which says the following.

Also note this is about the Charles H. Rugg Case who is mentioned in one of the ledgers.

A general alarm for the arrest of Charles H. Rugg, the Maybee murderer, who escaped from Queens County Jail last night, was sent out from the Brooklyn Police Head-quarters immediately upon the receipt there of the news of his escape. An accurate description of the fugitive was also telegraphed to each station-house, and the entire police force is on the lookout for him. I also found the following information on the web. Maybee and her daughter at Brookville, Long Island, in November, 1883, was hanged yesterday in the County Jail at Long Island City. On the website Murder by Gaslight, the Long Island Murders, it explains the entire case in detail of Lydia R. Maybee who lived in Brookfield, Long Island, and Charles H.

These are two beautifully rare handwritten ledgers.. That show the crime of the times in Brooklyn.

State of 8.625 percent. Does Not Apply to Non Residents of N. Because Of size limitations of my scanner, the full item may not show in some of the scans. Item will be in plastic & backed on cardboard (If feasible) for safe transit. INVENTORY BEING ADDED DAILY SO COME BACK OFTEN.

ALWAYS WALK AWAY WITH A DEAL. IF THERE IS A PROBLEM PLEASE LET ME KNOW SINCE MY SYSTEM AUTOMATICLLY OPENS UP A UNPAID ITEM CASE AFTER 5 DAYS. Be sure to add me to your. The item "Rare Attorney Ledger Brooklyn Handwritten 1800s Prisoner Hanged Black American" is in sale since Thursday, June 11, 2020. This item is in the category "Collectibles\Historical Memorabilia\Cities & Towns".

The seller is "lastcenturyjunk" and is located in East Meadow, New York. This item can be shipped to United States.