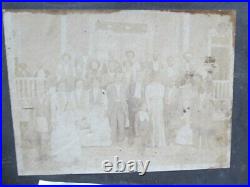 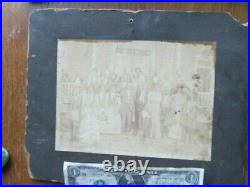 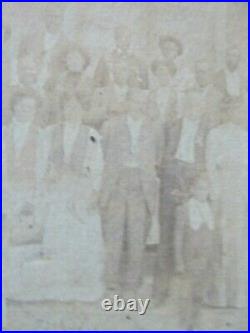 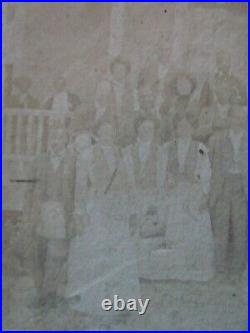 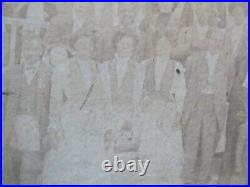 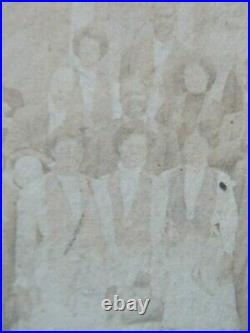 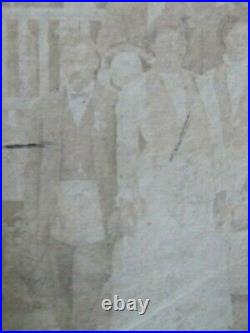 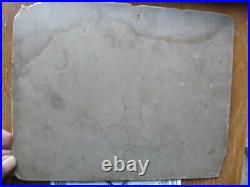 Extremely RARE ANTIQUE Outdoor Albumin Photo of 25 African American People, Many Wearing Fraternal Organization Sashes & Aprons, Mississippi, c. DESCRIPTION: Nice, incredibly early and rare studio matted albumin outdoor photo of about 25 African American people. Appears to be a variety of men, women, and a couple of children, although mostly women. All are dressed up, and it is clear that many of them are wearing similar vest-like outfits.

MOST OF THE VESTS ALSO HAVE LARGE, 3-4 DIAMETER DISKS OF MEDALLIONS SUSPENDED FROM THEM. Some of the men are also wearing Masonic type aprons and lapel ribbons.

These outfits, with the medallions suspended, are very similar to those seen in another period cabinet photo I had from Holly Springs, Mississippi. In that one have lettered "badges" on one side, folded ribbons on the other, and similar large disks suspended on the bottom. Disks have a star in the middle. Lettered badges could be made out in that one and appear to be different, e.

NG, NT, LG, VP vice president? , NJ, HJ, and MNG, etc. More difficult to make out details in this one, because it was taken outside, and from a greater distance. Photo appears to have been taken on the porch of a large building, possibly a fraternal hall. The photo is in good condition overall.

The cardboard mat is complete, although one corner is in a couple of pieces (they are still there and will be sent). My scans show it all. Very serious pose, typical of the day. This also came with a ledger book for the fraternal group, with all sorts of information, names, etc. Which I will also be listing separately.

Good early antique photos of African Americans. Are very scarce and hard enough to find today, BUT THIS ONE IS ESPECIALLY NICE AND INTERESTING.

BEING A LARGE GROUP OF THEM, AN OUTSIDE SHOT, AND A FRATERNAL ORGANIZATION MAKES IT VERY DESIRIBLE. Photo itself measures about 5" x 7", and the matte adds 1 1/2 on each side.

This is no newer than 1880 or so. This format was common at the time.

Would make a great gift for the collectors in your family. Something of this rarity is a great picture in any condition. This came with a collection of a number of early antique studio and other photos of African American individuals, I believe from an early album, including CdVs, cabinet photos, and other early photos, many identified with photographer names, and all from various towns in Mississippi. It also came with the ledger book referred to that is loaded with many names and information, which I believe was from this fraternal group.

THIS IS AS RARE A PHOTO AS I HAVE EVERY SEEN. NOT ONLY AN EARLY GROUP OF AFRICAN AMERICAN WOMEN, BUT AN EARLY FRATERNAL GROUP. You will never see another early one like it again. The item "RARE Antique Albumin Photo, LG African American Fraternal Group, Mississippi" is in sale since Sunday, December 27, 2020. This item is in the category "Collectibles\Cultures & Ethnicities\Black Americana\Photos".

The seller is "marvinsmom9" and is located in Hampden, Massachusetts. This item can be shipped worldwide.