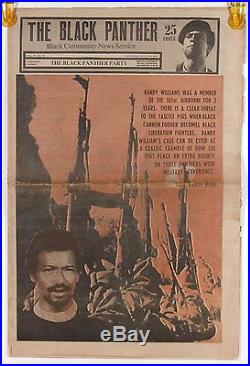 Very Rare and original, 1970 issue of "Black Community News Service" Newspaper published by The Black Panther Party and featuring a fantastic cover photograph of Three year, 101st Airborne Member, Randy Williams. The Newspaper is dated Saturday April 25, 1970 and identified as Volume IV, Number 21. 11 1/2 by 17 1/2 and contains 20 pages of reports and editorial comments related to the agenda of the Black Panther Party, the persecution and segregation perpetrated against African Americans and the Partys ideological focus on socialist revolution without racial exclusivity. This issue features several articles focusing on 101st Airborne s' Randy Williams, including a center spread with the headline In Two Years Randy Williams has shown Love, Respect and Dedication to his People and in Doing so Has Made the Transition from'Good Soldier' and'Gook Killer' to'Criminal','Murderer' and'Ambusher'.. Other article titles include The Most Crucial Question Facing Black People Today is To Be Or Not To Be, Bobby Seale's Life, Let Him Go, Bruce Richards Political Prisoner, etc. The Newspaper contains stringent and often violent anti-establishment articles and in both photographic and artistic illustrations paint a picture of the struggle of African Americans in their attempt to overcome the horrific situation that existed in the United States during the 1960s. The Black Panther Community News was eloquently described by Landon Williams in 1970 in this way. The Black Panther Black Community News Service, is not just a newspaper in the traditional sense of the word, it's more than that.

Its story unfolds far from the perfumed parlors of the petty bourgeoisie. It tells the true story of what happens in the concrete inner-city jungles of Babylon when brothers and sisters off the block, workers, and members of the petty bourgeoisie decide to cast aside their petty personal goals and aspirations, and begins to work unselfishly together with a common goal in mind. The Black Panther documents step by step the actions taken by, and programs instituted by the Black Panther Party in its unstoppable drive to serve the people; and documents before the whole world the repression and murders committed by Amerikkka's corrupt monopoly capital in its dastardly attempts to stop this move to institute people's power.

The Black Panther teaches the people the strategic means for resisting the power structure. The Black Panther Black Community News Service tells how the correct examples of the Party, led by Huey P. Newton, spread like wildfire throughout fascist Amerikkka. The Black Panther documents for all humanity to see how the wretched slaves of Amerikkka moved fearlessly to establish ALL POWER TO THE PEOPLE. The weekly issues of The Black Panther also show how people who will be free refuse to be either cowed or intimidated by death, imprisonment, or exile, and continue to develop and expand.

It is a lesson in the objective truth, that the spirit of the people is indeed greater than the man's technology. The best that humanity possesses will never yield to any oppressor. Issue by issue, the people's revolutionary struggle for national salvation unfolds in the pages of The Black Panther Community News Service, free from the distortion, bias, and lies of the oppressor controlled mass media. The People's paper tells how starting out with nothing, the People's Party, The Black Panther Party, moved with the people to implement Free Breakfast Programs to feed our hungry children, Free Health Clinics to care for the sick, Free Clothing Programs to clothe our needy, Liberation Schools to educate our youth and Community Centers to keep the community informed.

With each meal served, with each child clothed, and with each bandage applied, we were attacked wilder and wilder - Fred Hampton and Mark Clark murdered in their sleep by Chicago's thin blue line on December 4, 1969 and the L. Office attacked by 400 crazed pigs on December 8, 1969 VOL. The Black Panther Black Community News Service is not only a history of the people's growth, but also the pigs fanatical repression as they near total destruction. The Black Panther documents and indicts Amerikkka for the fascist police state that it is, attempting to crush all dissent by force. The Black Panther Community News Service is a living breathing history that continues each and every day. It is not an ordinary newspaper. It is the flesh and blood, the sweat, and tears of our people. The Black Panther Black Community News Service is truly a mirror of the spirit of the people. This very rare and iconic, 1970 issue of the Black Panther Party Newspaper is in very good to excellent condition. The Newspaper is complete, intact and well preserved with some overall and uniform age toning and a central horizontal crease (as with all examples we have ever seen). There is some light edge wear and chipping , as well as some spine wear with some light splitting but overall this is a well preserved example this 1970 counterculture publication and an important piece of African American History. A very rare and historically important, 1970 issue of "Black Community News Service" Newspaper published by The Black Panther Party and featuring a fantastic cover photograph of Three year, 101st Airborne Member, Randy Williams and a fantastic addition to any collection! PLEASE ALSO NOTE: We will be leaving for 15 days (much needed) vacation on the evening of Tuesday November 18th and we will be away until December 3rd. The item "ORIGINAL 1970 BLACK PANTHER PARTY NEWSPAPER BLACK COMMUNITY NEWS SERVICE #1" is in sale since Friday, November 13, 2015.

This item is in the category "Collectibles\Cultures & Ethnicities\Black Americana\Other Black Americana". The seller is "walnutts" and is located in Brewster, Massachusetts. This item can be shipped worldwide.