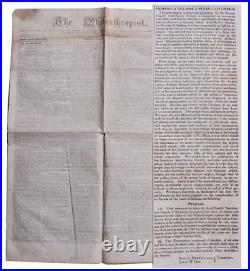 This is an issue of the newspaper of the Ohio State Anti-Slavery Society. The society was founded in 1835 and per OCLC records the paper was published from 1836 to 1843 under at least two publishers. Org, the paper's first publisher, James Birney, faced significant community backlash.

To prevent Birney from printing, a mob of white Cincinnatians destroyed the newspaper's printing press on July 12, 1836. Undeterred, Birney remained in Cincinnati and continued to publish his newspaper. Abolitionist John Rankin also was the victim of mob violence.

Pro-slavery advocates once tried to embarrass him by shaving his horse's tail and mane. This issue was printed after Birney's tenure, and most of its first page (and the first column of the second) is devoted to a speech by Alvan Stewart of the New York State Anti-Slavery Society arguing that Congress had the power to abolish slavery. That's immediately followed by a four column editorial arguing the opposite.

There are a number of reports of other antislavery societies as well as a descriptive list of antislavery works on sale at the Anti-Slavery Depository in Cincinnati. Of note is a long classified from the Decatur (Indiana) Anti-Slavery Society calling for a statewide convention and signed in type by Samuel Donnell. The convention was ultimately a success, as the statewide Indiana society formed in 1838 with one of its founders being Donnell's nephew, Luther Donnell. Nine years later, Luther and other members of the Decatur Anti-slavery Society would make national news when they helped an escaped slave woman and her children flee to Canada. OCLC locates four institution with physical holdings of the paper, none of which hold this issue.

ALL ITEMS ARE GUARANTEED IN PERPETUITY TO BE AUTHENTIC AND ORIGINAL. Get images that make Supersized seem small. Tailor your auctions with Auctiva's.

The item "Ohio Anti-Slavery Society Newspaper Slave Slavery African American Abolition" is in sale since Tuesday, December 1, 2020. This item is in the category "Books\Antiquarian & Collectible". The seller is "shakhammer8u4s" and is located in Houston, Texas.