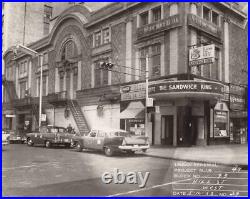 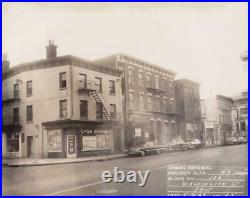 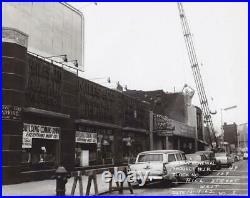 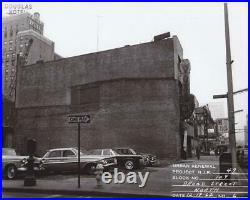 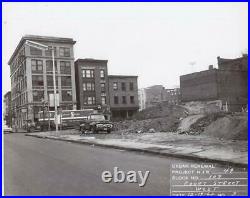 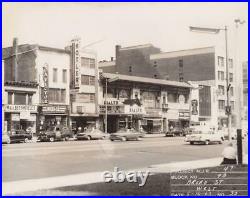 Through the late 1960s, Newark experienced 17 of these projects, the second largest of any city in the country. According to the preface of the 1959 Newark Urban Renewal Plan, Creeping blight threatens every portion of Newark. Together with the existing severely substandard conditions, it has made imperative the establishment of a city-wide comprehensive renewal program in order to deal effectively with these problems.

Because the vast majority of urban renewal policy makers were white, Black and Puerto Rican communities had little representation in projects that they were disproportionately impacted by. The Hill Street Renewal Project, classified as NJR-49 by the Newark Housing Authority, demolished buildings near City Hall with a proposed goal of building high rise apartments and new commercial buildings. The photos were taken by Ace Alagna with his backstamp on versos. Alagna was a native of Newark and a professional photographer who was a member of the White House press corps for decades. His exceptionally well composed street level views capture the work of NJR-49.

We see buildings in the process of demolition, piles of rubble, and cleared lots. One of those lots became a (presumably temporary) parking lot across the street from City Hall. Dozens of local businesses are seen with exquisite signage, though we are unable to tell how many of these were torn down. At least one, Miles & Co. An appliance store, is shown with with sales signs in the windows reading Building Coming Down, Everything Must Go! While contemporaneous reports show that only a small number of residents were affected by NJR-49, it's clear from these photos that many businesses were impacted, even if they weren't torn down. We think further research could determine whether those businesses were African-American owned and/or whether they were ultimately demolished. While the Monsignor Noe Field Archives & Special Collections Center has a large archive of Alagna's work, it does not appear from the finding aid that it has any of these images.

A fascinating glimpse of Newark's business district around City Hall, documenting its buildings and businesses in a time of ever-increasing social strife. This item is offered by Langdon Manor Books, LLC, antiquarian booksellers.

We are members of the Antiquarian Booksellers' Association of America (ABAA), the International League of Antiquarian Booksllers (ILAB) and the Independent Online Booksellers Association (IOBA) and adhere to their rules of ethics. ALL ITEMS ARE GUARANTEED IN PERPETUITY TO BE AUTHENTIC AND ORIGINAL. Get images that make Supersized seem small. Showcase your items with Auctiva's. This item is in the category "Collectibles\Cultures & Ethnicities\Black Americana\Photos". The seller is "shakhammer8u4s" and is located in this country: US. This item can be shipped worldwide.