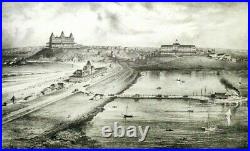 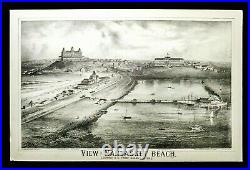 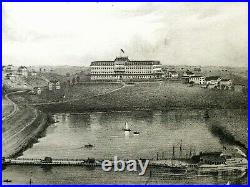 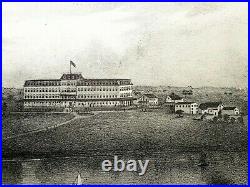 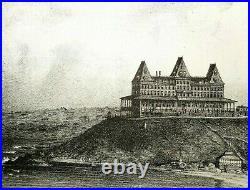 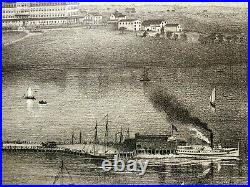 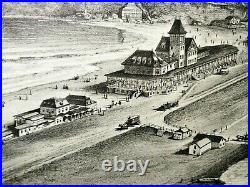 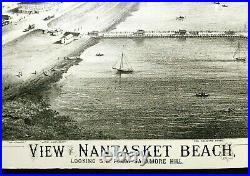 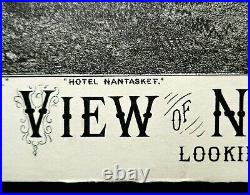 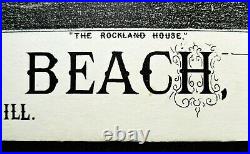 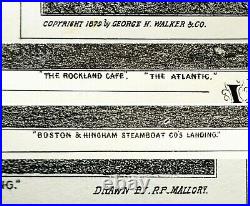 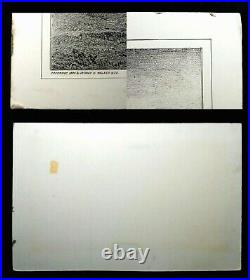 18" Height x 27 ½" Width. This large folio vintage black and white steel engraving was previously laid down (glued with fixative) on foam core board.

The print was wrapped in plastic shrink wrap and was found in the estate as it is presently. None of these occurrences are fatal or significantly depreciate the overall value of this historical vintage print. The foam core backing board and plastic once shrink wrapped over it have largely preserved the print until now. It's dated 1879 and the third quarter of the 19th century, when the Victorian concept of architecture was on a grand scale and the leading American manufacturers and most prominent American patrician families (mostly wealthy industrialists) would ostentatiously show off their new found wealth and erect these enormous public buildings, often named after themselves for posterity.

This rather rare image of Nantasket Beach located in Hull, Massachusetts shows this celebration of'big. Big was not for simply the sake of big but rather a pursuit of the impossible and the unrealized, as if these kinds of monumental, sky-scraping public architecture could only be realized in America and the nascent United States. An outstanding late 19th century steel engraving that shows the grandeur of and ambition of Victorian resorts and public parks and of the enormously wealthy Victorian era American industrialists who made them.

The name of the hotel is in the caption Atlantic House. It burned to the ground in January 1927. It was built in 1877 by John Damon and later enlarged to about 175 rooms. Most of the site is now occupied by the Atlantic Hill Condominiums. Very Good to Excellent overall vintage condition.

Previously laid down on foam core board with shrink wrap that has since been removed. Please scroll down the page to view enlarged photos below.

The item "NANTASKET BEACH HULL, MA 1879 LG B & W ENGRAVING, R P MALLORY LAID DOWN/UNFRAMED" is in sale since Friday, July 19, 2019. This item is in the category "Art\Art Prints". The seller is "modsanctuary" and is located in Milford, New Hampshire. This item can be shipped worldwide.