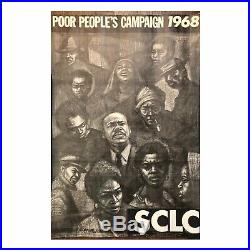 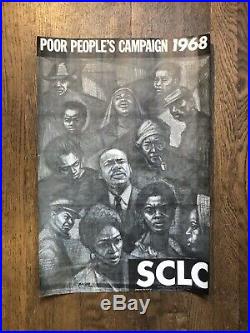 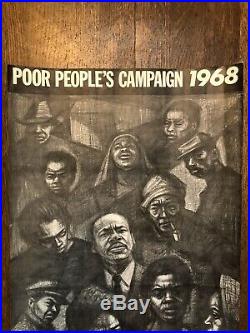 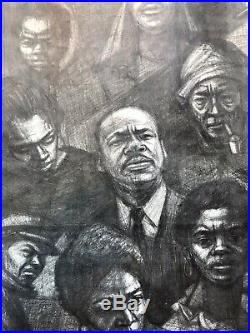 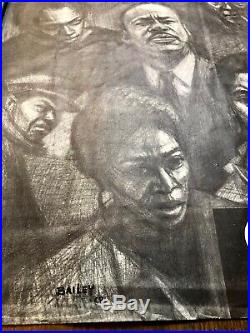 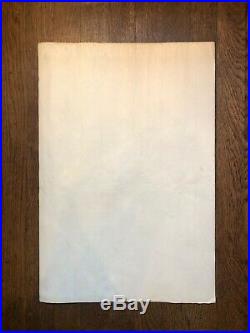 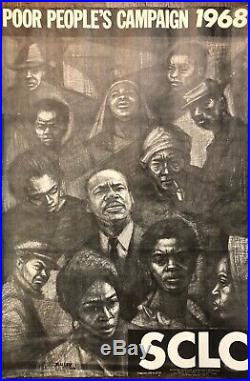 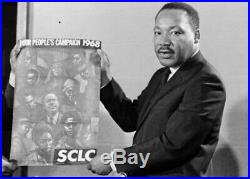 Up for sale we have. Martin Luther King SCLC Poor Peoples Campaign 1968 Civil Rights Historic Poster. This iconic image is a print of a charcoal drawing of various leaders of the SCLC including MLK signed "Bailey".

Titled Poor Peoples Campaign 1968. Noted Martin Luther King Jr. Last photo was taken by Horace Cort a month before MLK JR. Then president of the Southern Christian Baptist Leadership Conference (SCLC), displays the poster to be used during his Poor People's Campaign that spring and summer, on March 4, 1968.

He was assassinated exactly a month later; April 4, 1968, so the poster was not circulated very long, making this poster very scarce to find as well as quite historic! Poster is in Very Good vintage condition with some general wear.

Some general creasing in various places, and a more pronounced crease in the lower left corner. Some small tears on the edge of the left side.

Poster isn't quite flat, but can easily be professionally flattened. A very important part of Black American History and would make a great gift or museum or gallery piece! Please message with any questions! The item "Martin Luther King SCLC Poor Peoples Campaign 1968 Civil Rights Historic Poster" is in sale since Tuesday, February 11, 2020. This item is in the category "Collectibles\Cultures & Ethnicities\Black Americana\Prints, Posters & Paintings".

The seller is "fnseattle" and is located in Seattle, Washington. This item can be shipped to United States.