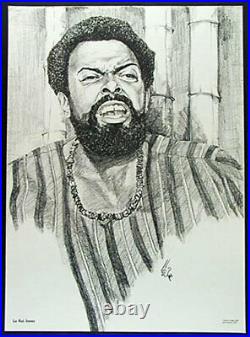 Jones was also an accomplished playwright. His play Dutchman opened off-broadway and received critical acclaim. In Dutchman, an encounter between a white woman and a black intellectual exposes the suppressed anger and hostility of American blacks toward the dominant white culture. In 1965, he founded the Black Arts Repertory Theatre in Harlem, and in 1968, he founded the Black Community Development and Defense Organization, a Muslim group committed to affirming black culture and to gaining political power for black people.

In 1968, LeRoi Jones changed his name to Amiri Baraka in reverence of his Muslim beliefs. He has taught at several universities, and continues to write to this day. Black movement posters are scarce, highly collectible, and sought after by institutions worldwide. King Gallery - Since 1971 - Specializing in Rock Concert Posters and Sports Memorabilia Can't find it?

He maintains one of the largest private rock poster collections in the world and is regularly called upon by publications, libraries and collectors worldwide for examination and appraisal services. He is also a highly respected authority on early sports cards and has been featured in numerous publications both in the United States and in Japan. In 1977 he opened King's Baseball Cards, the first full time sports memorabilia store in California. Please visit us at D. King Gallery if you are in Berkeley, just a 15 minute BART ride from San Francisco.