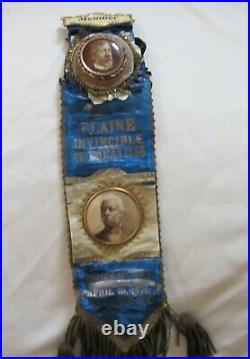 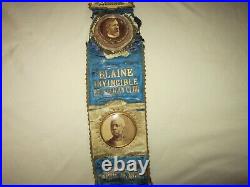 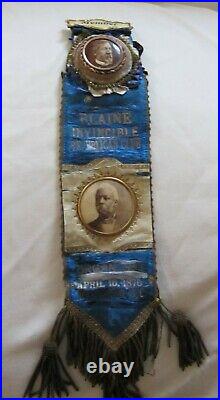 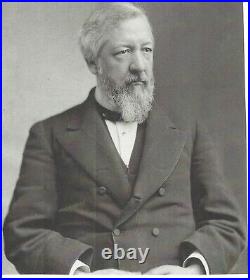 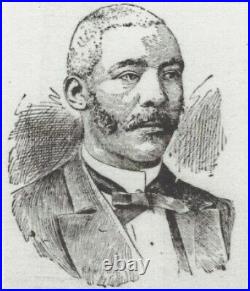 Membership Ribbon from the Blaine Invincible Republican Club of Washington, an African American political club ribbon. The Ribbon, 13 x 3 inches, composed mostly of silk with attachments including a celluloid "Member" tag at top, a 1-inch round celluloid engraved portrait of Blaine below it, a 1 1/2-inch round celluloid portrait of Perry Carson at center, remnants of a black silk ribbon on verso, and gilt braided fringe at bottom and surrounding the Blaine portrait. The Blaine Invincible Republican Club was a political organization which was chartered in 1876, and was discussed frequently in the Washington press from 1884 through their founder and president until his death in 1909. The chapters remained in existence at least through 1932. The club's namesake was white Republican leader JAMES G. BLAINE, who served in Congress from 1863 to 1881, ran unsuccessfully for president in 1884, and was Secretary of State from 1889 to 1892. Blaine was a strong supporter of Black suffrage. Blaine's portrait is mounted at the top of the badge. Several other Republican clubs across the country (black and white) assumed the Blaine Invincible name, most notably in San Francisco, but the Washington club was the only one to continue under that name long after its namesake's influence had passed.

At bottom is an uncaptioned portrait of PERRY H. He represented the city's Republicans of all races at the national conventions from 1880 to 1900. Large in size as well as influence and personality, he was known as the "Silver-Haired Giant" or the Tall Black Oak of the Potomac. Carson was known as the voice of the working black Washingtonians. He spoke for his people and represented low-income black residents at multiple Republican National Conventions.

As a teenager, he assisted abolitionists as they aided fleeing slaves. He was arrested but released and later supported the Union in the Civil War by doing odd jobs for the army and ultimately becoming a volunteer. After the war, Carson moved to Washington and quickly became a leader in the African-American community. He worked for Mayor Sayles Bowen as a bodyguard and was a trusted messenger to Alexander Shepherd, exposing him to important area politicians. Carson also organized the "Boys in Blue, " a regiment of local black men to defend black residents from the nearby Irish men who saw the working-class blacks as a threat to their jobs and freedom.

The regiment gave Perry the name of Colonel. Stirred up by uniting local poor blacks to demanding equality to protesting Jim Crow laws. Some silk wear and loss stabilized by gilt trim. Expertly backed with rice paper to sure up and protect stability. But a wonderful example of early Black Americana with images of two very important abolitionists.