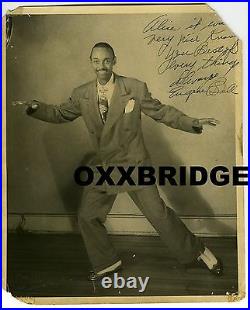 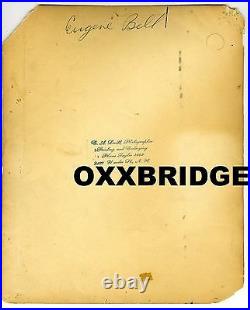 Tap Dancer / Black Vaudeville. DETAILS: Original photograph of tap dancing legend Gene Bell. Measures 8" x 10" inches. We carry an extensive selection of original black vaudeville theatre photographs and ephemera from the 1880's-1930's. BIOGRAPHY: Eugene "Gene" Bell Bell was a regular performer during the height of African-American Theatre. A hoofer since the age of ten, he made his debut in vaudeville. Later he performed on several Big Band tours across the US and Europe.

He was a frequent guess star on both Ed Sullivan and The Merv Griffin Show. Bell received an Emmy for his performance in the television special Minstrel Man. We carry a large assortment of vintage stage performer photos and ephemera from the 1880's - 1960's. Oxxbridge Galleries was founded in 1987. You will be pleased by the friendliness and knowledge of our staff.

This item is in the category "Collectibles\Cultures & Ethnicities\Black Americana\Photos". The seller is "oxxbridgegalleries" and is located in this country: US. This item can be shipped worldwide.