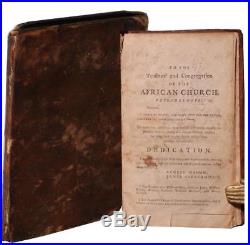 First African American Church Philadelphia Magaw Absalom Jones Richard Allen. A discourse delivered July 17, 1794, in the African Church of the city of Philadelphia, on the occasion of opening the said church, and holding public worship in it the first time.

About good: lacks title leaf, ¼ x 2¼ rectangular piece of dedication leaf excised from lower outer corner, not affecting text; some early inked numbers on dedication page; portions of final two blank leaves perished; binding moderately worn with some loss at edges and corners. This is a sermon delivered at the opening of Philadelphia's first African American church and the first black Episcopal church in the United States.

The congregation was led by Absalom Jones. By early 1791, after making inroads to Benjamin Rush, Jones and other black activists started planning for their own church. The plans were met with fierce resistance by many white religious leaders, including the threat by one Methodist elder to disown any black Methodist who participated in the church's creation.

This resistance led to an impossibly low amount of financial donations and, were it not for Rush's intervention in encouraging a financier to give loans to the group, the church may not have been completed. Another hurdle was the building interruption caused by the yellow fever epidemic that began in July of 1793. It quickly led to civil chaos, with hundreds dying due to the lack of treatment caused by an ever-decreasing white medical force. Rush stepped in again, asking Jones and Richard Allen to lead the African American community in tending to the sick.

They agreed, and in September the mayor put notices in the newspaper encouraging citizens to apply to them for aid. Despite this being the opening of a black church, the sermon was given by a white preacher. The sermon itself is riddled with a sense of otherness. It reflected the feelings of the white clergy and populace as Magaw directed the black parishioners to be grateful for the fact that those who had enslaved Africans actually helped them by giving them Christianity--taking them from a land of Pagan darkness, to a land of Gospel light. He further insisted upon the congregation's duty of gratitude, owing a debt not only to those who worked against the slave trade, but to the citizens of Philadelphia whose benevolence caused the creation of this handsome, spacious, and very convenient church.

He also demanded a duty of humility: remember your former condition. Pride was not made for man, in any even the highest stations in life; much less for persons who have just emerged from the lowest. It is said, there is a great deal of this among your people, already; and that it is increasing fast.

In a pamphlet issued one month later on the reasons for the creation of the church, Jones responded to Magaw's Pagan darkness comment by pointing out that his flock's darkness wasn't the land of Africa, but the state of enslavement. This approach to the building of African American churches became the formula for their spread throughout the United States as well as their importance to the cohesiveness of black communities. OCLC locates 12 copies over three entries. A paternalistic relic of a monumentally important moment in African American history.

This item is offered by Langdon Manor Books, LLC, antiquarian booksellers. We are members of the Antiquarian Booksellers' Association of America (ABAA), the International League of Antiquarian Booksllers (ILAB) and the Independent Online Booksellers Association (IOBA) and adhere to their rules of ethics. ALL ITEMS ARE GUARANTEED IN PERPETUITY TO BE AUTHENTIC AND ORIGINAL.