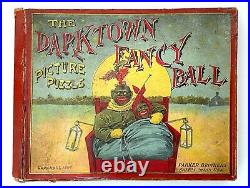 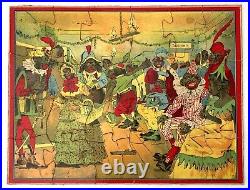 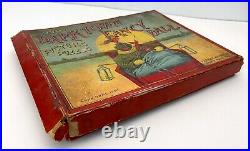 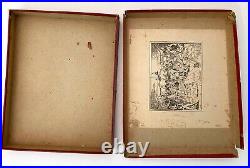 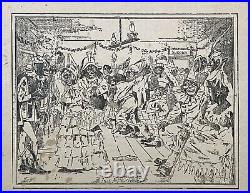 An original chromolithograph puzzle from Parker Brothers, Darktown Fancy Ball , it was published in 1894 and is an exemplar of the racist comedy of the day. The puzzle is about 8 ½ x 11in very good condition, the box shows some wear and has split corners, as pictured. "The Darktown Fancy Ball Puzzle" is a twenty-four piece paper covered cardboard picture puzzle of a caricatured African-American dance hall with African-Americans dressed as clowns, bellhops, knights, military officers, etc.

The box cover is chromolithographed with an image of a caricatured couple in a carriage, the man with feathers in his hair and the woman with a nappy around her head. The theme of Darktown, a fictitious segregated community, was familiar to Americans of the Victorian era.

Currier & Ives, the New York-based lithography firm, produced an extensive series of Darktown prints from the late 1870s through the mid-1890s, using caricatures and coarse stereotypes to lampoon blacks who moved north after the Civil War. The item "Darktown Fancy Ball Parker Bros puzzle antique black americana racial caricature" is in sale since Sunday, March 28, 2021. This item is in the category "Collectibles\Cultures & Ethnicities\Black Americana\Paper". The seller is "giltminnow" and is located in Greenfield, Massachusetts.