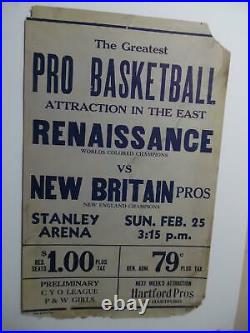 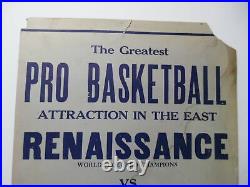 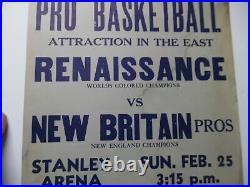 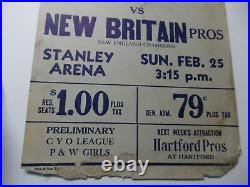 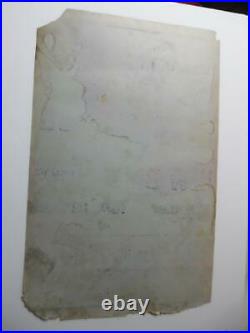 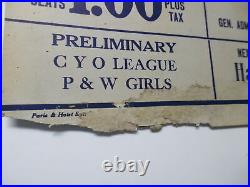 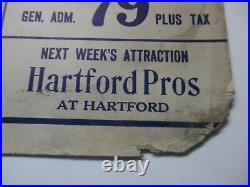 This is an original vintage c. 1940 window card poster for the New York Renaissance, or New York Rens as they were know, the first professional African American basketball team in the United States.

This poster is printed one side only on cardboard, measures about 14" x 22" and was issued for the Sunday, February 25th game against the New Britain Pros, New England Champions, at the Stanley Arena in New Britain, Connecticut. Next weeks attraction is listed as the Hartford Pros. The year isnt given for this poster but I believe it is probably 1940 since February 25th was a Sunday that year. This window card has some paper loss at the bottom and some staining and is rather well worn wear. In spite of the less than stellar condition this exceedingly rare artifact of American basketball history still displays well and would be an important part of any serious collection.

The following is some historical information on the New York Rens from Wikipedia. The New York Renaissance, also known as the Renaissance Big Five and as the Rens, was an all-black professional basketball team established February 13, 1923, by Robert "Bob" Douglas in agreement with the Renaissance Casino and Ballroom. [1] The Casino and Ballroom at 138th Street and Seventh Avenue in Harlem was an entertainment complex including a ballroom that served as the Big Five's home court. Following each game, a dance took place.

The success of the Rens shifted the focus of black basketball from amateur teams to professional teams. Initially, the Rens played mostly in Harlem, but by the end of the 1920s, as attendance began to dwindle, the team could be found more often playing on the road, barnstorming across the country out of necessity. The Renaissance are also the topic of the 2011 documentary On the Shoulders of Giants.

The Rens were one of the dominant basketball teams of the 1920s and 1930s. They were originally known as the Spartan Braves of Brooklyn. [2] The team played its first game on November 3, 1923. That night the Rens played a team of white players; interracial games featured regularly on their schedule, drawing the largest crowds.

[3][4] In its first years, the team strove to beat the Original Celtics, the dominant white team of the time, and claim the title of world champions: in their fifth encounter, the Rens did so for the first time, on December 20, 1925. [5] During the 1932-33 regular season, the Rens compiled a record of 120-8 (six of those losses came at the hands of the Celtics, who the Rens did beat eight times). [6] During that season, the Rens won 88 consecutive games, a mark that has never been matched by a professional basketball team. In 1939, the Rens won the first professional basketball championship, when they beat the Oshkosh All-Stars, a white team, 34-25, in the World Professional Basketball Tournament in Chicago. The team compiled a 2588-539 record over its history.

Some of the longest-serving and best-known early Rens were Clarence "Fats" Jenkins, Pappy Ricks, Eyre Saitch, Charles "Tarzan" Cooper, Bill Yancey, and "Wee" Willie Smith. In 1936, the Renaissance became the first top-level team to sign a four-year African American college star, David "Big Dave" DeJernett of Indiana Central. The Rens disbanded in 1949 after completing the 1948/49 season of the racially integrated National Basketball League as the Dayton Rens based in Dayton, Ohio.

[7] Six of the Rens are individual members: Tarzan Cooper, Pop Gates, Nat Clifton, John Isaacs, Zack Clayton, and founder and coach Bob Douglas. On May 9, 2017, the Historic Preservation and Transportation Committee of Community Board 10 unanimously (6-0-0) passed a resolution formally requesting that the New York City Council and the Mayor of New York City enact legislation to support the co-naming at the northeast corner of West 137th Street and Adam Clayton Powell, Jr. Boulevard to New York Rens Court. If you have questions about how to pay for this item please let me know.

The seller is "timomills" and is located in Lincoln, Nebraska. This item can be shipped worldwide.