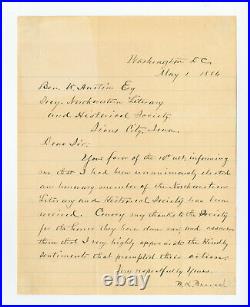 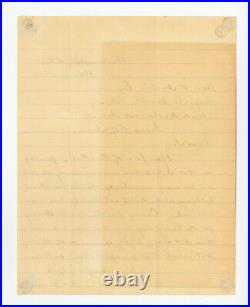 Austin of the Northwestern Literary and Historical Society, Sioux City, Iowa, thanking the Society for "the kindly sentiments that prompted" Bruce's being "unanimously elected an honorary member of" said Society, "and the honor they have done me". Now, a little googling shows that Austin was an autograph collector who fabricated this "Society" as a means for obtaining autographs! So hardly an honor, or a'unanimous' election, but an attractive and displayable Letter Signed, with good signature, and a rather interesting story.

Bruce was born into slavery in Prince Edward County, Virginia and went on to become a politician who represented Mississippi as a Republican in the United States Senate from 1875 to 1881. He was the first elected African-American senator to serve a full term. The letter exhibits a small area of uneven toning on the front, and a larger, darker area of uneven toning on the reverse. Traces of album mounts in each corner on the reverse. BRUCE, African American Senator, Letter Signed 1886.