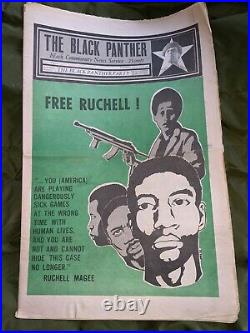 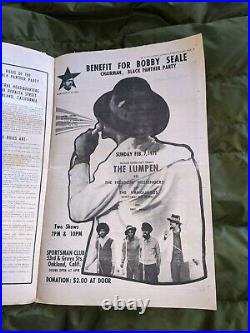 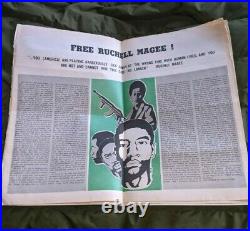 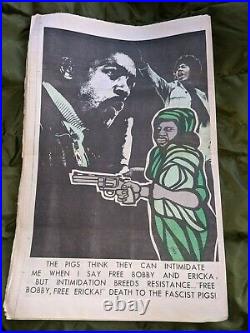 As a critical part of the Party's consciousness raising programme. The Party maintained a commitment to community service including various "survival programmes" developed by individual chapters. An important aspect of the paper was its focus on art work, especially with the back covers which were often in the form of a striking poster by Emory Douglas who had joined the party in 1967 having trained in graphic design at San Francisco city college. He worked alongside its editor, the Party's Minister of Information, Eldridge Cleaver. Contains rear cover artwork by Emory and his article'Revolutionary Art'. Revolutionary art begins with the program that Huey P. Newton instituted with the Black Panther Party. Revolutionary art, like the Party, is for the whole community and deals with all its problems. It gives the people the correct picture of our struggle whereas the revolutionary ideology gives the people the correct political understanding of our struggle. Some images from these papers are featured in the Tate Britain "Soul of a Nation" [Art in the age of Black Power] exhibition. "We always keep a close watch on the fascist's movement so that they will have a miserable ending". San Francisco, Black Panther Party, Ministry of Information.

This item is in the category "Collectibles\Cultures & Ethnicities\Black Americana\Paper". The seller is "commandoarmysurplus" and is located in this country: CA. This item can be shipped to Canada, all countries in Europe, all countries in continental Asia, United States, Mexico.