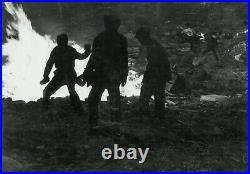 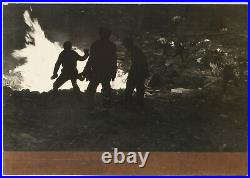 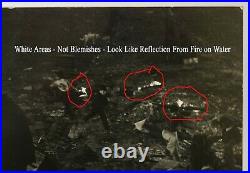 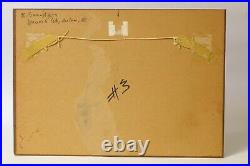 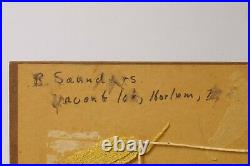 DESCRIPTION: - This listing is for an original vintage photographic print - this is not a later copy, not a half-tone - and not a photo-mechanical image. Approximately 9.5 x 16 inches, this black and white photograph is titled: Vacant Lot. Harlem and there appears to be a number following it that I cannot decipher.

The image is by Richard Saunders, mid-century African American photographer. The back of the photograph mount states: R. I searched to determine if this image was ever published and was unable to find it, or any references to it. The photograph is mounted on a piece of brown particle board approximately 4mm thick. The image appears to have been mounted for an exhibition - it has the simple R.

Saunders" for artist, the name of the image, date, and the number 3 "#3 on the back. It also has the old string used to hang on the wall at the top back center. This image came with several other Saunders images - all mounted and identified similarly. I suspect that the images were entered in an exhibition and then somehow never made it back to Saunders at the time. Such simple mounting makes me think this was exhibited many years ago - prior to his material being in formal museum or gallery events. MAKING HARLEM VISIBLE (by Richard Ings): In 2003, Richard Ings published thesis for a Doctor of Philosophy titled: Making Harlem Visible - Race, Photography and the American City, 1915 - 1955. In his thesis, he refers to important Harlem photographs - one of which is by Richard Saunders in the 1950 - a view of a street from a fire escape.

Based upon this, I wonder if this image is from the 1950's. ACQUISITION: - I obtained this and several other Saunders and Adger W. Cowans images a number of years ago at an estate sale of a Washington DC photographic collector. These images were included among other lots that were almost exclusively 19th century historical images (Civil War, political, etc). How the collector obtained the image is a not known to me.

CONDITION: - The image is very clean. You can see several blemishes along the edges. There are some impression lines that probably occurred during storage over the years.

When you hold the light so it reflects off the surface, you can see impression lines and scrapes in a few scattered places. So, I scanned the portion with Baldwin and then took photos with my Pentax digital SLR. You can see how the scanner and camera capture tones differently. The Pentax SLR tends to add a little warm tone - whereas the scanner has no color tones. RICHARD SAUNDERS (1922 - 1987): - The following is from Information Renaissance Web Site.

Richard Saunders was born in 1922 and became interested in photography while growing up in his birthplace of Bermuda. A local photographer whom he used to follow around gave him some old equipment to experiment with. When he was eight years of age, Richard Saunders and his family moved to the United States, where he put his early training to use while still in school.

And took up photography training at Brooklyn College and the New School for Social Research in New York City. Through his friendship with Gordon Parks, he acquired a job as a photographic lab technician, which enabled him to study and learn the techniques of the top photojournalists at Life magazine. In 1950, Saunders was asked by Roy Stryker to join his team of top photojournalists in Pittsburgh to document the city's transition from a smoky mill town to a modern city. Saunders spent nearly two years there, living in the Hill District, where he "became part of the environment" and took four to five thousand photographs of the community.

For the next eleven years, Saunders went on to accept assignments for top publications such as Ladies Home Journal, Fortune, Ebony and Look, among others. In addition, he travelled to Latin America to document the Alliance for Progress, an economic development program sponsored by the U.

Government through the United States Information Agency. In 1967, Saunders accepted a staff position with the USIA's magazine for Africa, Topic, and was based in Tunis, from where he travelled throughout Africa photographing events, leaders and ordinary people. Transferred in 1972 to Topic's office in Washington, D. Saunders continued to travel and photograph in Africa until his retirement in 1986. In addition to publication of his photographs in magazines, Saunders has exhibited his work in group and one-person shows.

He was also affiliated with Black Star Publishing Company. If so, you must request an invoice before paying for multiple items. I do my best to describe items accurately and fairly. This item is in the category "Collectibles\Photographic Images\Photographs".sherfy" and is located in this country: US.

This item can be shipped to United States, all countries in Europe, Japan, Canada, Australia.