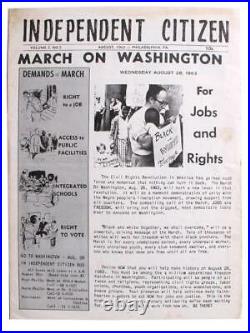 Single sheet, folded, making four pages of text and graphics. Very good: folded horizontally at center; light creasing; toning/stains at extremities, several words in ballpoint on the last page. This is a rare periodical whose first page promoted 1963's March on Washington which took place at the end of the month.

Its editor, Melvin Metelits was a Communist activist at the time who also served on the board of the Philadelphia Federation of Teachers. After leaving the communist party, he became a certified Maggid. A series of graphics regarding the demands of the march is accompanied by text urging attendance for everyone who knows that none are free until all are free. Underneath the graphics are three places that marchers could find buses to travel from Philadelphia to Washington.

According to Metelits' biography at radicaljewishphila. Com, he cited his organizing of busloads of Philadelphians to attend the march as one of his greatest contributions to society, so we imagine this issue was used to great effect.

OCLC locates one institution with one copy of the the periodical, different from the one on offer. This item is offered by Langdon Manor Books, LLC, antiquarian booksellers. We are members of the Antiquarian Booksellers' Association of America (ABAA), the International League of Antiquarian Booksllers (ILAB) and the Independent Online Booksellers Association (IOBA) and adhere to their rules of ethics. ALL ITEMS ARE GUARANTEED IN PERPETUITY TO BE AUTHENTIC AND ORIGINAL.

Get images that make Supersized seem small. Showcase your items with Auctiva's.

The item "African American March On Washington Independent Citizen 1963 Philadelphia" is in sale since Tuesday, December 1, 2020. This item is in the category "Books & Magazines\Antiquarian & Collectible".