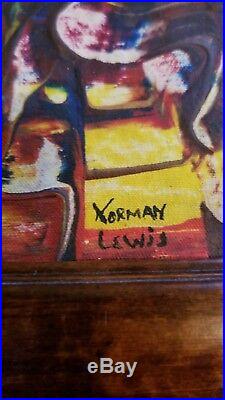 Offering abstract painting signed by listed African American artist, Norman Lewis. It is presented in a simple wood frame (unmatted). Information on the artist taken from a public exhibition source listed below. He was the sole African American artist of his generation who became committed to issues of abstraction at the start of his career and continued to explore them throughout his lifetime.

Lewis art derived energy from his vast interests in music both classical and jazz - as well as nature, ancient ceremonial rituals, and social justice/equality issues central to the civil rights movement. A native of New York City, Norman Wilfred Lewis was born to St. Kitts immigrants Diana and Wilfred Lewis.

The Lewis family lived in Harlem, and as a youth, Lewis held various jobs throughout his schooling but knew he wanted to be an artist from the age of ten. In 1929, Lewis found work as a seaman on a freighter and spent several years traveling throughout South America and the Caribbean, meeting local people and witnessing firsthand the poverty of Bolivia, Uruguay, Jamaica, and elsewhere. Upon his return to the United States, Lewis settled back in New York City. In the early 1930s, Lewis met artist and educator Augusta Savage, who ran an arts school in Harlem and was involved with lobbying the Works Progress Administration (WPA) to hire more black artists. From 1933 to 1935, he took classes at the Savage School of Arts and Crafts and attended Columbia University Teachers College. Lewiss deep commitment to social and economic equality led him to join the Artists Union, which was organized to protect the rights of artists and workers. A regular at 306, a cultural center in Harlem that attracted musicians, writers and young artists, Lewis was a co-founder of the Harlem Artists Guild (HAG) in 1935. In 1936, he began working for the WPAs Federal Arts Project, teaching classes. Lewis art at the time was grounded in social realism and focused on the lives and struggles of black Americans, but in the 1940s, he. While he remained active in the struggle for civil rights throughout his life, Lewis was skeptical about the power of art to effect change, explaining in a 1968 Archives of American Art interview with Henri Ghent, one of the things in my own self education, was the discouraging fact that painting pictures of protest didn't bring about any change. The item "African American Artist Abstract Expression Painting Norman Lewis" is in sale since Tuesday, January 29, 2019. This item is in the category "Art\Paintings". The seller is "fryus42" and is located in Greensboro, North Carolina.