1972 Original Civil Rights & Vietnam Poster, You Can't Be Black And Navy Too 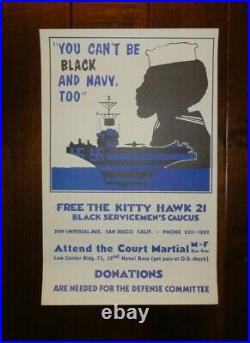 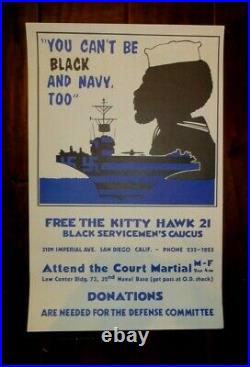 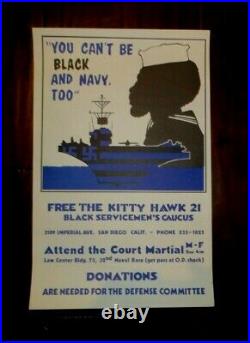 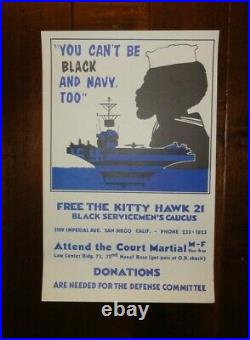 Rare 1972 Civil Rights and Anti-Vietnam War Political Poster. "You Can't Be Black And Navy Too, " and Free The Kitty Hawk 21, Black Servicemen's Caucus. The poster refers to a little known or remembered event that occurred during the Vietnam War, on the aircraft carrier Kitty Hawk, while on patrol in the Gulf Of Tonkin. It was on October 12 - 13, 1972 that a racial fight occurred and escalated into a full riot between black seamen and white seamen, which lasted two days. Naturally the black seamen, 21 of them were thrown into the brig and held for court martial upon returning to port in San Diego, California. No white sailors were arrested. An investigation and court martial was held and it was determined that the fight was started by the black sailors. They were confined for a year, but the situation was assisted by a court battle for the truth. In the end, some of the white sailors came forward and the court determined that the white sailors were well known racists on the Kitty Hawk, and all evidence proved that the white sailors started the fight and fanned the riot to include more than one hundred men were encouraged to fight by the white racist sailors. The black sailors had been court martialed and incarcerated for three years, yet no apology or public vindication was given to the victims. This Poster is genuine and original, guaranteed. Printed on thick paper, 11 1/4" by 17 1/2" in size, and in excellent condition. There are no tears, stains, holes, tape, or other damage to the paper.