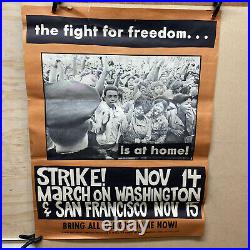 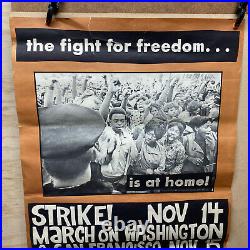 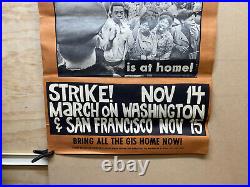 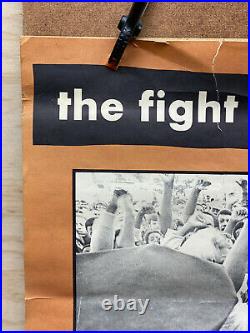 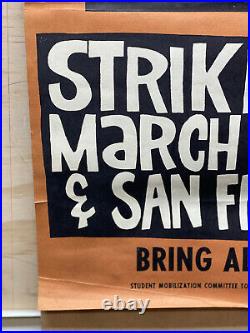 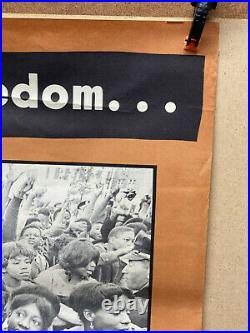 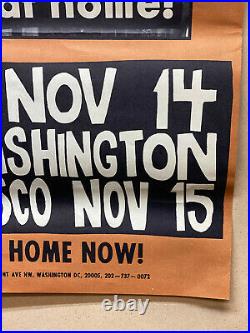 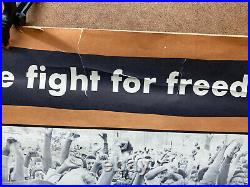 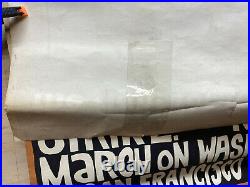 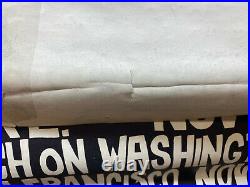 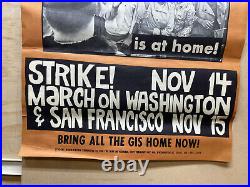 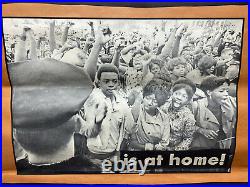 The Fight for Freedom is at Home. THERE WERE A FEW DIFFERENT VERSIONS OF THIS POSTER. THIS IS A RARE ONE THAT SHOWS ALL AFRICAN AMERICANS DEMONSTRATING.

1967 AFRICAN AMERICANA Fight for Freedom is at home - Strike Poster. THE POSTER IS IN FAIR TO GOOD CONDITION.

IT IS NOT PERFECT, THIS WAS. THERE IS WRINKLING AND SOME CREASING ON THE POSTER. EDGE WARE AND AT THE TOP BY "THE FIGHT FOR FREEDOM" THERE IS SOME. I HAD TAPED THE BACK TO PREVENT AND FURTHER.

PLEASE NOTE: The poster is not made with traditional thick paper. Stock it is made from regular paper, to find these in the condition that they are in was a really rare find.

LIKE I HAVE DESCRIBED, THE POSTER IS FAR FROM BEING PERFECT. IT IS HARD A RARE HARD TO FIND PIECE OF VIETNAM ANTI WAR PROTEST HISTORY.

PLEASE CHECK OUT ALL THE PICTURES FOR DESCRIPTIONS AND CONDITION DETAILS. YOU WILL RECEIVE EXACTLY WHATS PICTURED IN THE LISTING. SOME HISTORY BEHIND THE EVENTS ABOUT THE POSTER.

"VIETNAM" ANTI WAR / CIVIL RIGHTS. A rare poster from SDS, "The Students for a Democratic Society, " an early part of the New Left, that sprung up parallel to the Civil Rights movement, and the more radical Black Panthers.

March on Washington Nov 14 and San Francisco, Nov 17" x 22" inches. Student Mobilization Committee, (1967) scarce handwritten poster on the back of a printed one The'National Mobilization Committee to End the War in Vietnam' was a relatively short-lived coalition of antiwar activists formed in 1967 to organize large demonstrations in opposition to the Vietnam War.

The organization was informally known as "the Mobe". Mobe was formed following the Spring Mobilization Conference held in Washington D. May 20-21, 1967, a gathering of 700 antiwar activists called to evaluate the antiwar demonstrations, including draft-card burnings, that had taken place on April 15, 1967 in New York City and San Francisco, and to chart a future course for the antiwar movement. The conference set another antiwar action for the fall of 1967 and created an administrative committee to plan it.

That committee was the National Mobilization Committee to End the War in Vietnam. Mobe planned a large demonstration for Washington D. This demonstration was a rally at West Potomac Park near the Lincoln Memorial. The item "1967RARE AFRICAN AMERICANA Fight for Freedom Strike Poster ANTI WAR/CIVIL RIGHTS" is in sale since Monday, March 1, 2021. This item is in the category "Collectibles\Cultures & Ethnicities\Black Americana\Prints, Posters & Paintings".

The seller is "suzytoybox2013" and is located in North Arlington, New Jersey. This item can be shipped worldwide.