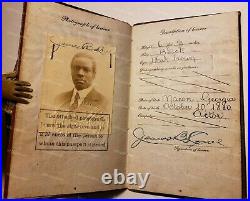 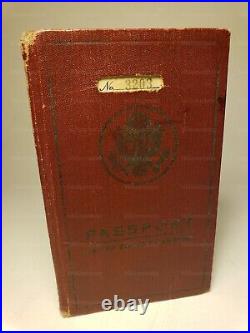 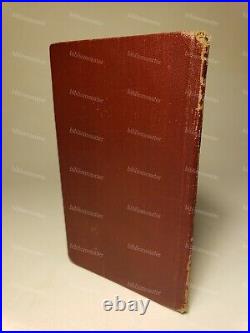 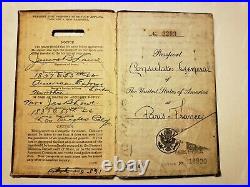 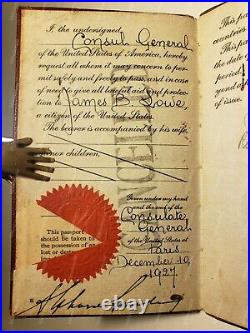 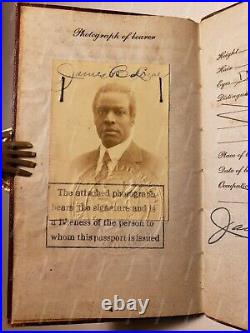 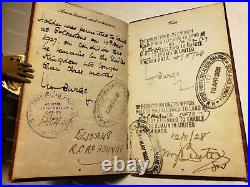 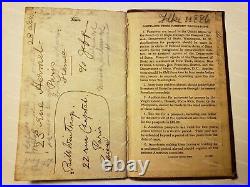 [PHOTOGRAPHS, AFRICAN-AMERICANS, COLLECTIBLE US PASSPORTS]. On offer here is THE ORIGINAL US PASSPORT FOR HISTORIC AND ICONIC AFRICAN AMERICAN ACTOR JAMES BUCHANAN LOWE. JAMES LOWE IS THE FIRST BLACK ACTOR (MALE OR FEMALE) TO STAR IN A LEAD ROLE IN A MAJOR MOTION PICTURE WHICH INCLUDED WHITE ACTORS.

Prior to this, most black actors and actors who had the opportunity to appear in film, appeared in'race pictures' which were produced by blacks for blacks and only featured black talent. Lowe was also the first Black lead actor in a Universal Pictures produced film. The US passport is in very good to excellent condition for its age.

It has the usual'cancel' cut in the seal and the cancellation stamp as shown. We have watermarked the images to discourage'image grabbing' for unauthorized online use on various blogs and other fan/media sites. Lowe and Paul Robeson were the only black male actors to star in leading roles for major studios which included white talent during the silent era. However, Lowe's performance in'Uncle Tom's Cabin' (Universal; 1927) easily predates Robeson's performance in' Borderline' (Pool Group of Switzerland; 1930) and thus is a pioneering moment in the history of Black Americana and American cinema. After Lowe left the United States following the shooting of' Tom's Cabin' he didn't return to America until 1941; likely due to the German occupation of France where he lived. For this reason, we believe Lowe's accomplishment went unoticed for decades and he's only relatively recently become known to film scholars and researchers. This is an important collecting opportunity for institutions and advanced collectors and serious collectors of African-Americana and cinema.

Lowe (1880 - 1963) was an American actor of the stage and screen who was best known for his role in the 1927 filmic adaptation of Uncle Tom's Cabin. James was born in Macon, Georgia, to James B. He first began a career as a stage actor before beginning to appear in movies in the mid-1920s. After a few minor roles, he took the lead in Uncle Tom's Cabin after fellow theatre actor Charles Gilpin dropped out of the picture. Although the film - and Lowe's performance - received favorable reviews among the general public at the time of its release, it has since been cited as the originator of the Uncle Tom stereotype.

He passed away in 1963. Uncle Tom's Cabin (1927). This item is in the category "Entertainment Memorabilia\Movie Memorabilia\Photographs\Pre-1940\Black & White". The seller is "bibliomonster" and is located in this country: US. This item can be shipped worldwide.