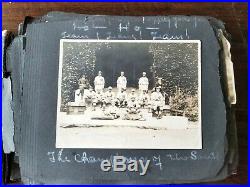 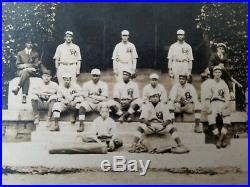 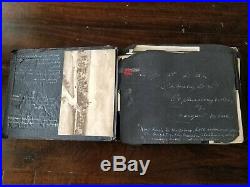 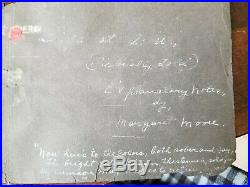 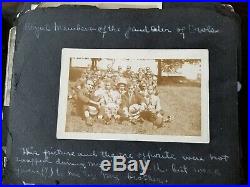 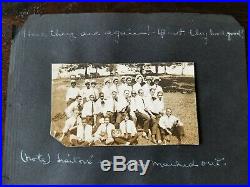 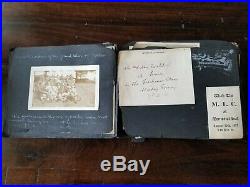 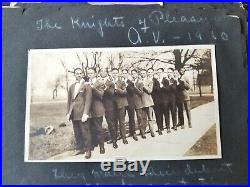 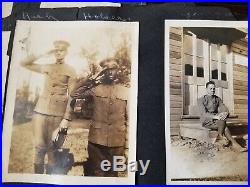 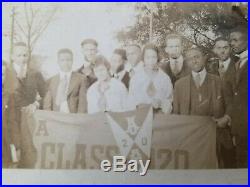 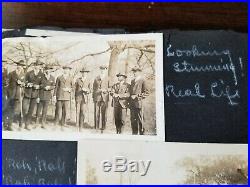 SCROLL PAST DESCRIPTION TO SEE ADDITIONAL IMAGES OF ALL PHOTOS IN ALBUM. Photo album of an African American student named Margaret Moore that attended the black college Atlanta University in Georgia from 1917 to 1920 based on dates. (Now known as Clark Atlanta University). Inscription on interior page says.

Structurally the album has fallen apart. The covers are separated and all the pages have come loose at the string binding. Each page exhibit chipping and wear. Blank spaces indicate missing photos which may include a handful of photos that were found loose shown in one of the scan. I think I have scanned all the photos in the book.

Scroll past description to see additional photos. Some I show on the page and then take a close up of. One of the most significant photos is a picture of the Atlanta University baseball team with the caption below it The Champions of the South Players are wearing AU on their jerseys. I would estimate 35% of the pictures are taken at Atlanta University and the surrounding area.

There are photos indicated they were taken at Stone Mountain. I would estimate the other 65% of the photos are taken at Woods Hole Massachusetts at a countryside hotel where it appears the students from Atlanta University took a trip there. Its interesting that it appears they had some sort of inter-school event with another college of white students. This may have been some sort of YMCA event as there are several printed cutout photos from some sort of publication that shows the same white and black students and has a YMCA title. Only about 6 or 7 of these cutout printed paper photos.

These are not included in the total 86 photos I mentioned. This trip to Massachusetts results in some fascinating and seldom scene 100 year old photos of white and black students interacting at a time of deep segregation in this country.

Some notable photos in the album include. Students holding Atlanta University pennants and banners appearing to be the class of 1920. African American men in what appears to be Atlanta University bathing suits at Woods Hole. Pictures in WWI uniforms as some students must have enlisted. A few pictures of a group of black men identified as the Royal Members of the Grand Order of Owls showing them holding an image of an owl.

A few pictures showing a group of black men identified as The Knights of Pleasure AU (standing for Atlanta University) 1920. A rare and desirable photo album. Please see my other auctions. The item "1917 African American Atlanta University Photo Album Champion Baseball Team" is in sale since Monday, January 20, 2020. This item is in the category "Collectibles\Photographic Images\Vintage & Antique (Pre-1940)\Photo Albums".