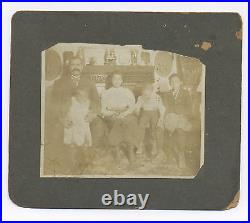 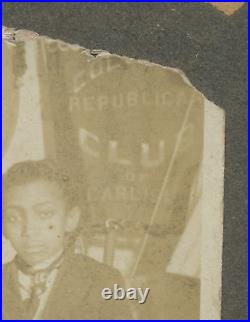 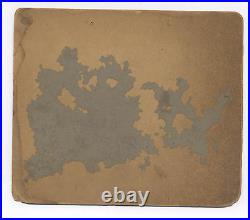 Extremely rare cabinet photo shows a black family sitting in their parlor with a Republican political campaign banner. The banner, which is hanging on the wall shown on the right side of photo, has the wording "Colored Republican Club Of Carlisle".

IF there is another word in that position under the word "Carlisle" the logical assumption is that the word would be Pennsylvania. This important photo which shows a black family with their "Colored Republican Club Of Carlisle" banner was discovered many years ago in Carlisle, Pa. It is highly unlikely that another example of this historically significant American black heritage related photo exists &/or will ever be found!! The mount measures 6 5/16 inches by 5 1/2 inches. The photo measures 4 15/32 inches by 3 3/4 inches. The sepia tone glossy photo has some softness in contrast. The photo which is in poor condition has some losses & chips missing at the top border & at two corners. The photo shows some dirt, a bit of surface wear, & a few tiny pinhead size surface indentations.

Is an estimate and the actual cost may differ. International Buyers - Please Note. This item is in the category "Collectibles\Photographic Images\Photographs". The seller is "imajgin" and is located in this country: US.