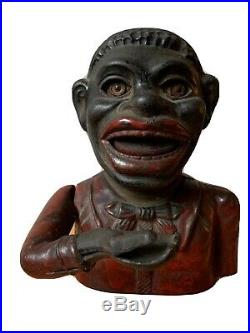 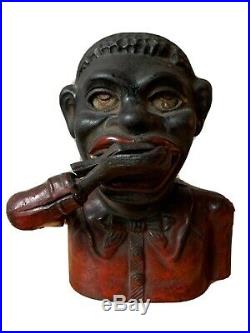 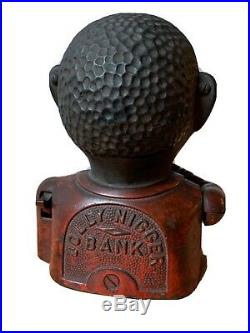 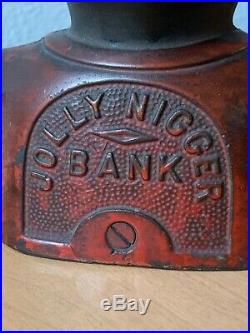 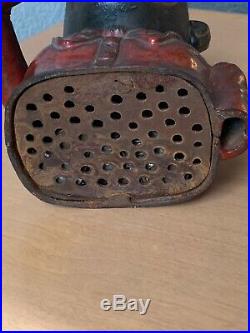 Late 19th - Early 20C Cast Iron JOLLY NIGGER Black Americana Bank. One of the most popular coin banks in American history, clearly illustrating that the lingering effects of slavery and institutional racism were solidly cast for generations after the Civil War. This manservant with stereotypically exaggerated African American features was happy (jolly) to serve his owner. It has the correct and appropriate cultural patina of a frequently handled object which is over 100 years old. The red paint on his shirt and lips is fully present but faded and aged.

The white paint on the eyes has yellowed with time, making him look as old as he actually is. The cast iron on his face and hair has the perfect time-worn sheen which gives him the animated vibrance of a bygone era. Some of these banks look a bit too nice, too clean, either having been repainted, or a much later reproduction. This one is made of heavy cast-iron and the mechanical mechanism works perfectly. When the lever on his left shoulder is pressed the arm and hand with coin move up to the mouth and the coin slides inside. The eyes roll back and the tongue moves during this motion, allowing him to gulp down the coin.

Dont miss the opportunity to own this authentic and unrestored original piece of Black Americana. I make an effort to describe items accurately. Please look at the photos as they are a valuable part of the description.

Check out my other auctions for unusual and/or rare advertising art, design, and mid-century icons. The item "1880s JOLLY NIGGER CAST IRON COIN BANK BLACK AMERICANA, JIM CROW STEREOTYPE" is in sale since Saturday, March 14, 2020. This item is in the category "Collectibles\Cultures & Ethnicities\Black Americana\Banks"." and is located in Wenatchee, Washington. This item can be shipped to United States, Canada, United Kingdom, Mexico, Germany, Japan, Brazil, France, Australia.