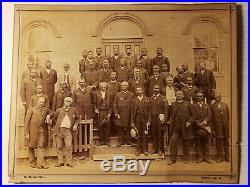 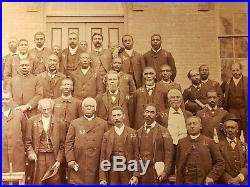 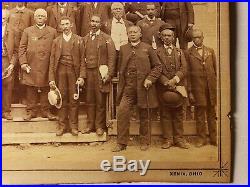 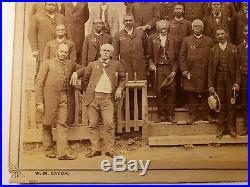 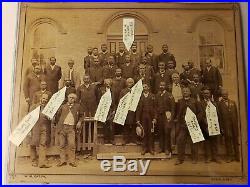 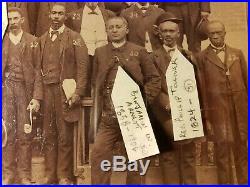 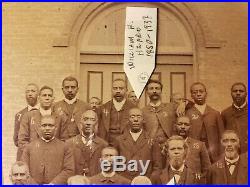 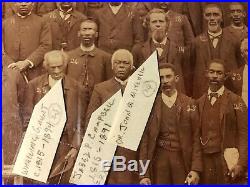 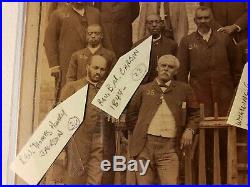 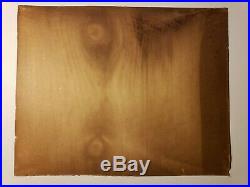 On offer here is an OUTSTANDING, ORIGINAL CABINET CARD PHOTOGRAPH OF 36+ PASTORS & ELDERS OF THE AFRICAN METHODIST EPISCOPAL CHURCH. The albumen photo measures 7.875 in x 10.25 in on standard cabinet card stock. Save for two very minor edge chips to the mount card, the image is in excellent condition and presents with great contrast and tonality. The reverse of the image bears transfer toning from the piece of backing wood which had rested against the back of the photo for over 140 years.

The photographer is William Gatch of Xenia, Ohio about where the image was taken. This is very close to Wilberforce University which was founded by members of the A. Church some of whom are shown here. Based on the date William Gatch began working in Xenia about 1874 - 1875? And the style of dress and relative ages of the identified men shown, we can date this to about the mid to late 1870's. In the image, the men appear to be numbered indicative of a reference of some sort which would identify each of these 36 men. However, after contacting numerous people within the A. Church national leadership and archives, found no record of this image nor of the' key' which would pair with the numbers to ID them. After our own efforts researching the likenesses of the men shown, we've managed to positively ID 8 of the men including.

(see the yellow tags in the photo; these yellow'post-it' tags are not actually on the image but a protective sleeve over the image). We're confident if additional time were spent with valuable resources such as' The Sons of Allen' by Horace Talbert, a. Will certainly place many more names to the faces of the men shown in the photograph.

Several of these men formerly in bondage, by the time of this image had led amazing and remarkable lives leading their respective communities through the church, civic leadership, business and in social efforts in the midst of a. Cabinet card images such as this are rare, and images with notable individuals in Black society are rarer still. A rare and important collecting opportunity. What greater prize and teaching artifact for an A. Congregation / organization than what is likely the oldest image of the churches founders in private hands?

This item is in the category "Collectibles\Photographic Images\Vintage & Antique (Pre-1940)\Cabinet Photos". The seller is "bibliomonster" and is located in Beverly Hills, California. This item can be shipped worldwide.