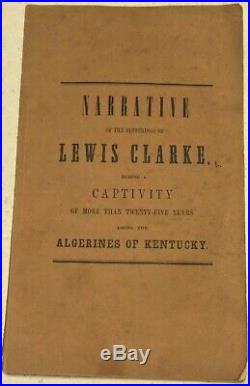 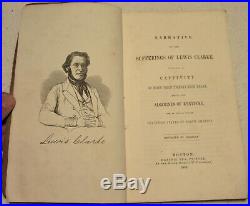 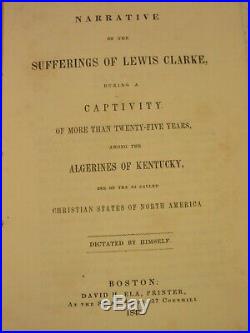 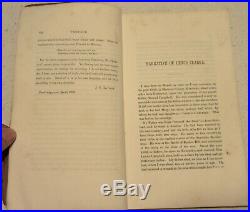 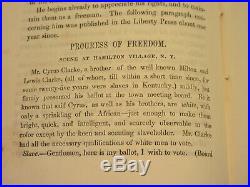 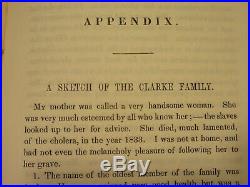 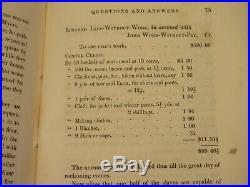 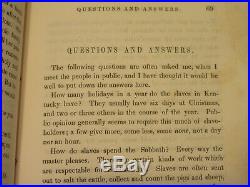 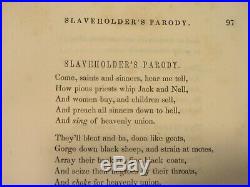 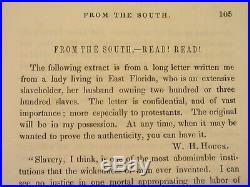 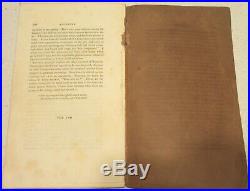 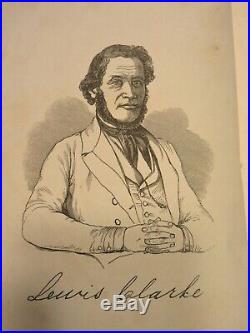 What a RARE and AWESOME find! Straight out of an old New England estate comes this historical book entitled "Narrative of the Sufferings of Lewis Clarke, During a Captivity of More Than Twenty-Five Years Among the Algerines of Kentucky" This is a first edition and it is in very good to excellent condition, with 108 numbered pages and its original wrap covers.

It contains an excellent portrait engraving of Mr. Clarke opposite the title page. It tells, in his own words, Lewis Clarke's candid enslavement story and how he gained his freedom. This is an historic, fantastic anti-slavery book published under the encouragement of Boston abolitionists. Anyone interested in scarce anti-slavery publications and history should relish this rare find indeed and would likely never find one for sale in better condition.

Lewis Clarke was born in Madison County, Kentucky, seven miles from Richmond, in 1812. Depending on the source, Clarke's birth year is listed as 1812 or 1815.

He is best known for his slave narrative, Narrative of the Sufferings of Lewis Clarke, During a Captivity of More Than Twenty-Five Years, Among the Algerines of Kentucky, One of the So Called Christian States of North America, dictated by himself. In the beginning of his narrative, Clarke expounds upon his slave and plantation-owning grandfather, Samuel Campbell. Campbell raped a female slave named Mary who, according to Clarke, was half white. They had one daughter, Letitia Campbell before Campbell married.

Clarke's father, Daniel Clarke, was a Scottish weaver who came to America for the American Revolution. He had married once before but his wife died and left him two sons. He fought as a Minuteman at the Battle of Bunker Hill and remained active until the end of the war effort. Campbell promised Clarke's father that Letitia would be free in his will, and with this promise, Clarke's father married her around 1800. Clarke's father died when Clarke was either 10 or 12 years old after receiving a devastating wound leaving him disabled, possibly paralyzed.

Even when promised freedom, Letitia did not receive it and stayed enslaved as Clarke claims Campbell's heirs destroyed the will. During this time, Clarke fell into the hands of his grandfather's children, being the property of William and Betsy Benson, who treated him brutally. [2] On arriving in Canada. What a sensation, when it first visits the bosom of a full grown man - one, born to bondage - one, who had been taught from early infancy, that this was his inevitable lot for life. He published Narrative of the Sufferings of Lewis Clarke in 1845, and an extended edition which included the experiences of his brother Milton, in 1846.

He also traveled about giving lectures on his experiences as a slave. It was during one of these trips that he met Harriet Beecher Stowe, who was so impressed by Clarke and his story that she would base the character George Harris in her novel Uncle Tom's Cabin on Clarke. While Clarke was not traveling, he lived in Warren County, Pennsylvania, before moving over the New York border to the town of Busti, New York, in 1850, where he worked as a farm hand on the farm of David Storum, the father-in-law of African-American abolitionist Jermain Wesley Loguen. His body lay in state at the Kentucky State Capitol on order of Governor William Bradley, and he was subsequently buried in Westwood Cemetery in Oberlin, Ohio. The item "1845 Abolitionist Slave Narrative Book Sufferings Lewis Clarke Black Slavery KY" is in sale since Tuesday, July 7, 2020.

This item is in the category "Books\Antiquarian & Collectible". The seller is "yankeepeddlerpal" and is located in Clinton, Massachusetts. This item can be shipped to United States.